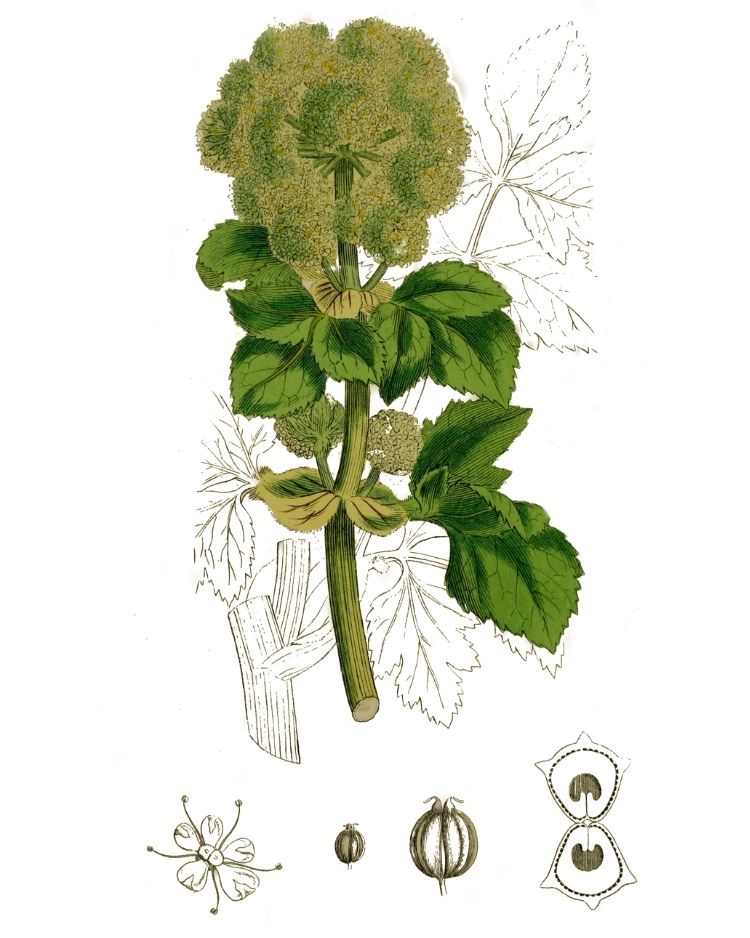 Alexanders has been used as food and medicine since Roman times and was once known as the parsley of Alexandria. Below you’ll learn how this forgotten kitchen garden herb was cultivated for centuries until it was replaced by celery.

Once popular in ancient kitchen gardens now thrives in abundance by the sea. It was cultivated for centuries as a common table vegetable.

Like many Apiaceae plants, alexanders exudes aromatic oils with a pungent, sweet smell that attracts a wide range of pollinating insects. According to Pliny (70 AD), it gained the name Smyrnium because of its distinctive myrrh-like fragrance.

A tall plant, up to 1.5 m high, bearing greenish-yellow flowers in umbrella-like clusters with a pungent, myrrh-like scent. The leaves are bright green and toothed, arranged in groups of three at the end of the leaf stalk. The globular fruit is ridged and ripen to a blackish colour.

Coastal areas and sea cliffs, roadsides and wastelands, ancient ruins, hedgerows, banks and quarries. This Mediterranean native is found in Asia Minor, Syria and the Canary Islands, as well as being naturalised in the British Isles.

Alexanders was once known as ‘black potherb’ because of its black, spicy seeds. It is often found growing in ancient monastic ruins where it was once cultivated as a kitchen garden herb by monks. The leaves and stalks can be blanched or steamed to add to soups, broths and stews. The plant tastes similar to celery. The flowers can be added as a spice and decoration to salads. The buds can be eaten pickled or fried.

The fruits are a rich source of protein, carbohydrates and fatty acids. The plant contains flavonoids and other bioactive compounds.

Alexanders was a traditional plant for cleansing the blood and a digestive herb for strengthening the stomach. Seafarers used it to treat scurvy and herbalists used it to relieve stomach and urinary problems. It was also a remedy for headaches, toothaches, swellings of the body, cuts and bruises, asthma and consumption, or tuberculosis.

In pastimes, the stalks were bundled and used as cattle fodder or fuel.

There is little data about the plant’s toxicity. Consult a medical professional before using as a medicinal herb.