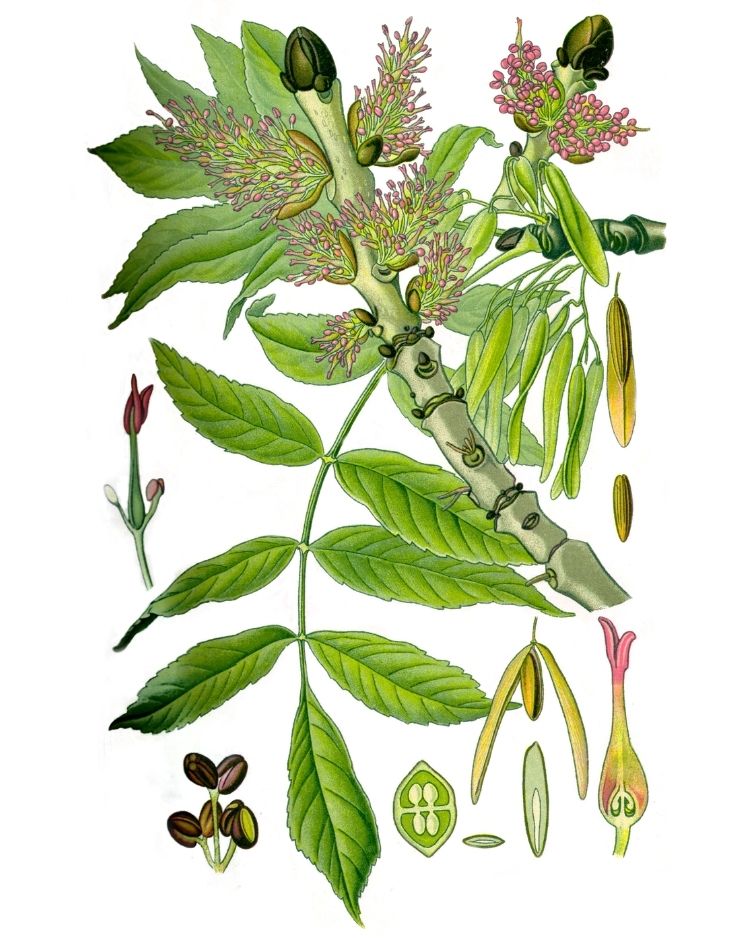 One of the principal uses of ash (Fraxinus excelsior) has been as a timber tree.

The wood is renowned for its strength and flexibility, such as for building, furniture-making, garden tools, farming equipment, weapons and musical instruments.

Geoffrey Grigson writes that the ash is “immensely useful even in our age of steel and alloy”.

John Evelyn (1620–1706) wrote in his Sylva that the ash is so useful that “every prudent Lord of a Manor should employ one acre of ground with Ash to every twenty acres of other land, since in as many years it would be more worth than the land itself”.

In Britain, ash remains one of the most important hardwoods grown by the Forestry Commission.

That said, our main interest here lies in the ash tree’s story through myth and magic, food and medicine.

The ash is famous in many cultures as a powerful tree of life, death and rebirth.

It was believed that its roots extended as far below the earth as its branches rose to the sky.

The ash is a tree of immense symbolism and meaning, and as such, it has been both protected and respected throughout the ages.

The beautiful elegance of the ash tree earned it the title ‘Venus of the forest’, but its familiarity, as Culpeper said, needed no description.

Ash has light grey bark and large compound leaves divided into four or eight pairs of lance-shaped leaflets with sharply toothed margins. The tree grows up to 40 m. The leaves are preceded by black flower buds bursting into clusters of greenish-white or purplish colours. The fruit or seed, each has a single long wing called an ‘ash key’, which aids wind pollination.

The keys (the winged seeds) have been eaten as a pickle in Europe and Asia. The young shoots are edible and can be added raw to salads. The leaves have been used for tea. The tree sap can be tapped to make ash wine.

It is not noted as having any particular nutritional benefits, although its astringency may explain some of its healing effects in folk medicine. The leaves may have a laxative effect.

It was once an ancient remedy for snake bites, and was believed to cure many other ailments from obesity to leprosy! The tree was also used to treat jaundice, kidney and bladder stones, flatulence, warts, ringworm, and earache.

The wood was used to make spears as well as being excellent for firewood.

There is little data that I can find a warning about the side effects of using ash in food and medicine.