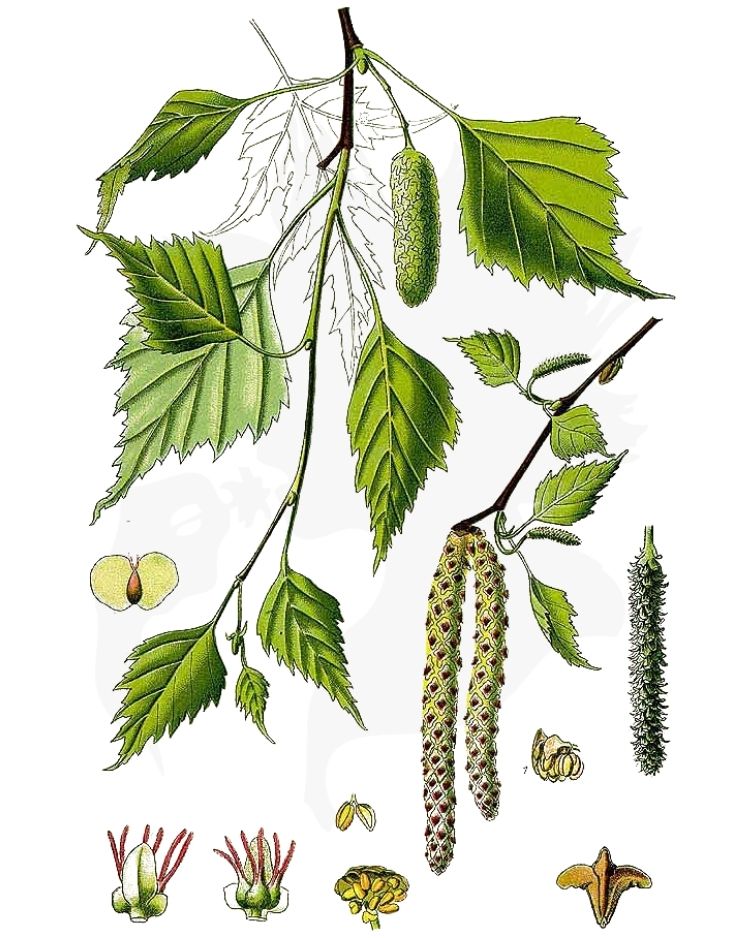 The birch tree is the ‘lady of the forest’ with its silvery bark, elegant white boughs and delicate leaves.

The Latin name for the tree is from the Celtic betul, and the history of its name may date back to the Sanskrit bhurga, meaning ‘a tree whose bark is used for writing upon’.

In the language of flowers a birch meant modesty and grace. It is the first tree to bud in spring in northern Europe, which links it to the cuckoo’s call and the return of spring. Slavic people saw the birch as a harbinger of spring and for them the tree symbolised eternity.

Dedicated to the moon, or sometimes to both the sun and the moon, because of its iridescent appearance, the peeling curly bark is actually highly flammable and has been used in torches. Thus the birch has long been associated with rituals and beliefs surrounding light.

The Anglo-Saxon name for the tree was beorc or birce, meaning ‘white’ or ‘shining’.

There are around sixty species of birch (Betula spp.), which are widespread in the northern hemisphere with at least one species found in the Himalayas and China.

This tall tree is recognisable by its smooth, shiny bark often pale or white with deep furrows in mature specimens. It can grow up to 25 m high.

The short, slender branches rise to a pyramid-like crown on younger trees and become pendulous on older trees.

The leaves are egg-shaped or triangular with toothed margins and hairy undersides.

The tiny flowers are called catkins and they bear winged seeds.

This deciduous tree buds in spring and often flowers before the leaves are out.

Like many trees, birch was a large edible plant in times of famine. The bark was stripped and ground to make meal for flour and the young leaves added to salads for a bitter, aromatic flavour. The twigs also made a quick snack for foragers.

The sap of the tree can be tapped and fermented to make drinks, vinegar or syrups. Birch sap has been popular as a springtime drink even in times of plenty.

A sugar company in Finland extract xylitol from birch sap to use as a sweetener, which contains 40% fewer calories than sugar (sucrose). Xylitol is used in diet foods, chewing gum and may help to prevent tooth decay.

Personally, I stay away from hyper processed ‘alternative’ sweeteners.

Birch sap has long been purported to have many health-giving benefits, including being helpful for the kidneys and bladder, for rheumatism, and was considered a general tonic.

It was also believed to be a cosmetic able to restore beauty and strength. Birch sap was once prescribed for skin problems, and to remove spots and freckles.

In ancient times, birch bark was often stripped and rolled to make torches and used as a substitute to paper. Birch twigs were also used to make brooms.

Soft, pliable birch wood has had many uses including in wood-turning to make broom heads, tool handles, furniture and toys.

Few precautions are known when using birch as a wild herb or edible.

Kermath, BM et al. (2013) Food plants in the americas: a survey of the domesticated, cultivated, and wild plants used for human food in north, central and south america and the caribbean.

Paine, A. (2006) The healing power of Celtic plants: their history, their use, and the scientific evidence that they work. Winchester: O Books.

Warren, P. (2006) British native trees: their past and present uses?: including a guide to burning wood in the home. Dereham. Wildeye.