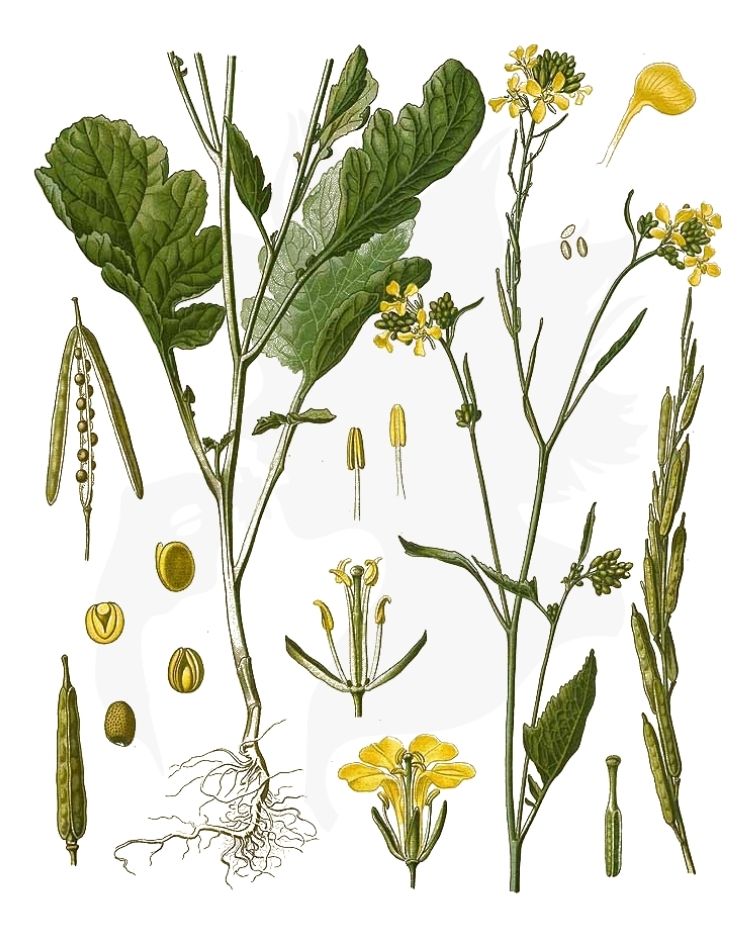 Black Mustard is an intrepid plant that has trekked its way across the world and is now cultivated in many countries including England, France, Spain, Greece, Turkey, Portugal, Holland, Finland, Norway, Poland, Romania, Russia, China, India, South Africa, and in the Middle East.

The plant is thought to have been introduced to Britain in 1720, but it may have been known as a condiment in eastern parts of the Roman Empire, according to an Edict on Maximum Prices issued by Roman Emperor Diocletian in 301 AD.

The name mustard is thought to derive from the Latin mustem, meaning ‘must’ (fermenting grape juice), and ardens, meaning ‘burning’ and referring to the hotness of the plant.

Yellow cross-shaped flowers atop stalks with bluish-green to grass-green leaves that are long and spear-shaped attached to clasping stems.

Annual. Thought to originate in the Mediterranean and near East, now widespread through Europe, western Asia, North Africa, and North America; cultivated in Nepal.

Prefers to grow along roadsides, fields, farmlands, and riverside meadows.

Black mustard was known to the Egyptians and Greeks as a plant similar to spinach and for its flavoursome seeds.

The Romans are credited with making black mustard into a sauce, and also for using the coarse herb as a pickling spice and table condiment.

In Medieval England, mustard was used to flavour a sauce of honey and olive oil that was drizzled over meat dishes.

The seeds can be ground into a mustard powder which is a popular ingredient of curry powders in Eastern cooking.

The young shoots or leaves can be tossed in salads and eaten raw or cooked as a potherb. The flowering tops can be cooked and used in recipes like broccoli.

Nutritionally, Black Mustard has potent antioxidant activity, which can help to reduce the incidences of many chronic diseases when included as part of a balanced diet.

Studies have shown B. nigra packs an incredible 97 mg of vitamin C per 100 g, while it doesn’t skimp on other nutrients either.

Hippocrates (460–370 BC), a Greek physician who was hailed as the father of medicine, wrote about the medicinal actions of Black Mustard in 450 BC. The plant was used by the ancient Greeks and by the Chinese for thousands of years in food and medicine.

Early herbal texts recommend mustard for treating a wide range of conditions from alopecia and epilepsy to toothache and snakebites.

The seeds were thought to be good for lethargy, stomach complaints and as a blood purifier. Mustard poultices, or ‘plasters’, have long been used to treat rheumatism and sciatica.

While Black Mustard is not native to North America, the American Indians used it as a medicinal plant such as grinding the seeds into a snuff for head colds.

The Mohegans used the herb to treat headaches and toothache. It was also adopted by early settlers into an ointment for rheumatic pain.

Mexican Indians used mustard oil as a children’s cough remedy by rubbing it on the chest and covering with a flannel cloth.

In other uses, Black Mustard oil has been employed in soap-making. The oil is also used in commercial cat and dog repellants.

Mustard plants are grown for green manure, which grows quickly and provides a bulk agent to add to soil at around eight weeks; although gardeners should be aware that mustard manure may encourage pests and diseases of the cabbage family.

Black Mustard is a powerful-acting plant and may cause irritation internally to the gut or externally to skin. Use in moderation.