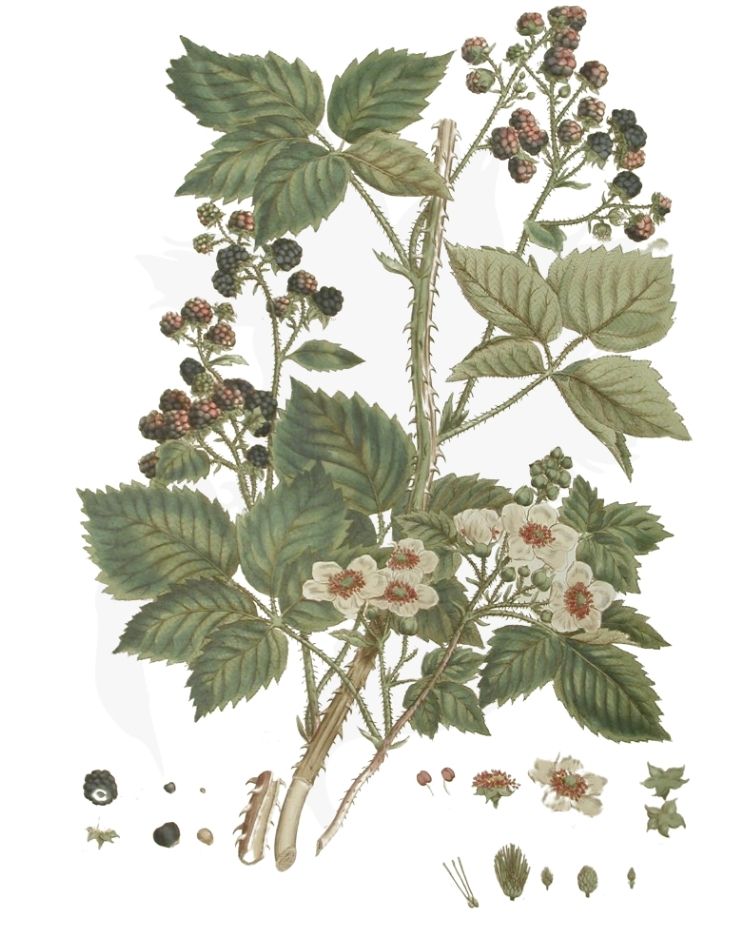 A popular bramble fruit, blackberries are often picked in late summer to autumn to make jams, jellies and pies. The leaves of this versatile plant also make a pleasant tea. Bramble is one of our most commonly used wild edibles.

Trailing, tangled, thorny stems bearing five-petalled flowers of varying size and colour, with prickly and toothed green leaves that turn reddish-purple in autumn. The fruits turn from green to red to deep-purple black.

Native to Britain and Ireland.

Commonly found in hedgerows, roadsides and waysides across Britain and Ireland. According to Mrs Grieve’s A Modern Herbal: “In Australia, the blackberry grows more luxuriantly than in any other part of the world, though it is common everywhere.”

Food Uses of Bramble or Blackberry

Blackberry picking is a popular pastime in the autumn in Britain and Ireland. Many people in towns and villages will walk along waysides and hedgerows to fill their buckets with blackberries to eat, cook and freeze. However, this is not a modern pastime.

Blackberries have been eaten since early human history. The seeds were found in the stomach of a Neolithic man dug up in Walton-on-the-Naze, Essex. They have also been eaten almost worldwide, for example, the berries are gathered and eaten in China.

Today the fruit is one of the most widely collected wild edibles. Blackberries are used to make jam, jellies, wine, liqueurs and pie fillings.

Blackberries are also mixed with crab apples to make fruit cheeses or can be made into savoury-sweet condiments, such as pickles, chutneys and ketchup, and to flavour vinegar.

In seventeenth-century England, blackberry was drunk as a cordial with spices and brandy. The leaves are used for tea. The stems are steamed and used as a vegetable. The young purple shoots can be added to omelettes or eaten with olive oil and lemon juice, or even with fish eggs.

Blackberry blossom is a useful source of nectar for bees too. Honeybees forage on the flowers to produce light-flavoured, fruity honey.

How to Harvest Bramble Stems

Blanch the Bramble stems in boiling water for 60 seconds. Drain and set aside. Fry the onion until translucent. Add the flour and stir the mixture continuously for roughly 45 seconds. Add the stock and keep stirring on medium heat until the sauce thickens. Add the seasoning and nutmeg, then add the Bramble stems and sour cream to taste. Cook gently for another 5 minutes. Serves 2.

Wash and drain the fruit and place it in a preserving pan. Add the juice of 2 lemons and ½ pint of water. Simmer the mash for 1 hour. Strain through a jelly bag. Towards the end of the juice straining, sterilise some jars.

For every 1 pint of juice, you extract, measure out 1 lb of sugar. Add the sugar to the juice and heat on low, stirring all the time until the sugar has dissolved. Simmer for 1 hour until the liquid has reached the setting point.

The setting point is when you can put a little bit of the juice on a plate. Now push your finger through the juice. If the juice doesn’t automatically fall back into itself and stays at the point you pushed it to; then it’s ready. Make sure you don’t over simmer the juice as you might end up with toffee. Pour into hot sterilised jars.

Nutritional Profile of Bramble or Blackberry

Some varieties of blackberries have more dietary fibre than wholemeal bread. Blackberries are also a very good source of vitamin C, around 15mg per 100g. Blackberries contain about 5% sugar.

The first berries that ripen are said to be the sweetest and juiciest, whereas smaller berries further up the stalk that ripen later maybe ‘seedy’.

Herbalists have recommended blackberry jelly, cordial or wine for its potent restorative powers. While Culpeper, who himself needs no introduction, praised the plant as a remedy for almost all ailments from wounds and ulcers to fevers and itching.

In Irish folk medicine, bramble leaves, roots and fruits were a common remedy for ailments such as colds, coughs and flu, because of the plant’s astringent and antiseptic properties.

In other uses, bramble stems have been used for weaving baskets, thatches, and even beehives, and the roots yield a black dye, as well as being used in the production of an orange dye and a green dye for wool in Scotland and Ireland.

There are few concerns about using bramble in food and medicine, but always consult your doctor for advice if you have a specific condition.