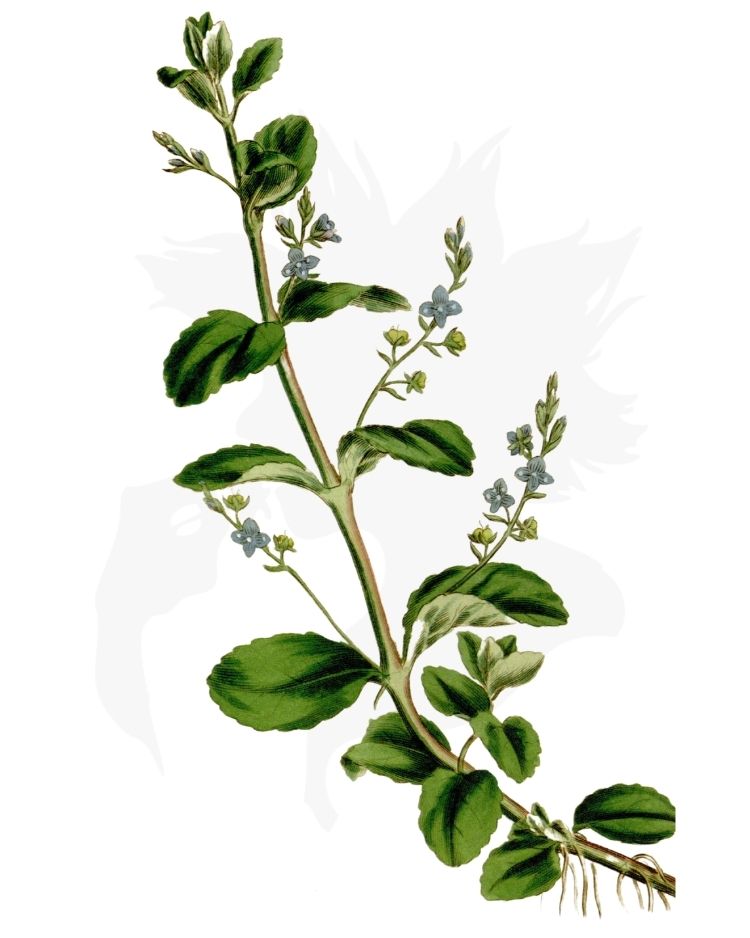 Brooklime is a delicate blue flower of ponds and streams and often grows with watercress.

It was used for centuries as a salad plant in northern Europe, collected in spring and well known for its pungency and bitterness.

Brooklime has tiny, dark blue flowers; occasionally a pink form of the flower is found. The petals open wide in the sun and partially in the shade. The leaves are oval, glossary green and leathery to the touch. The succulent hollow stems creep in mud and root at the nodes.

Native to Europe, temperate Asia and North Africa; naturalised in Britain, Ireland and other parts of the world.

The plant is perennial with flowers and fruits appearing May to September.

Bitter-tasting brooklime can be eaten like watercress by adding raw to salads or cooked like a potherb by boiling or steaming. This wild edible is best mixed with strongly flavoured greens to compensate and complement its bitterness.

Brooklime can be brewed as a tea, called tea de l’europe (or European tea), which has a flavour similar to Chinese green tea.

Brooklime is rich in vitamin C3 and antioxidants such as flavonoids and phenolics, which help to reduce incidences of chronic disease when eaten as part of our diet. Some studies suggest European brooklime also contains 3.8 g of protein per 100 g of fresh weight.

Traditionally, brooklime was used as a diuretic treatment for jaundice, urinary and kidney ailments, an expectorant for coughs and colds, and a cure for scurvy.Today we know that the plant contains vitamin C, as well as a glucoside (aucubine) and various other substances, such as sulphur.

A brown dye is derived from brooklime for dyeing textiles.

The plant is safe if cooked. Although it was eaten raw in the past, due to liver fluke it is best avoided raw.