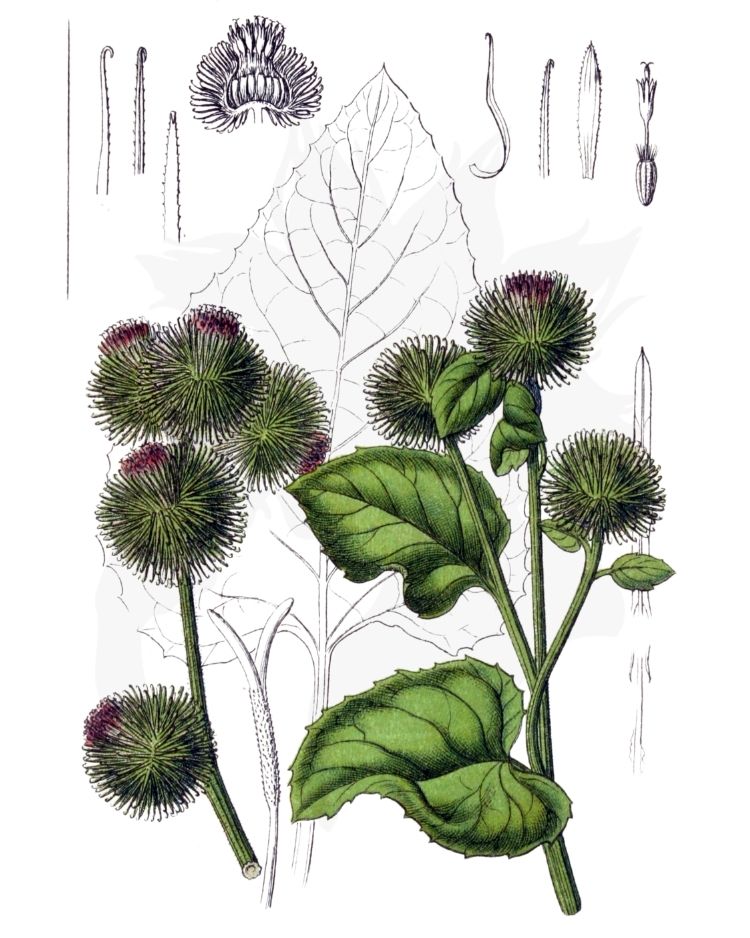 The common name for Burdock that we are familiar with today, the English ‘bur’, originated from the French bourre, meaning ‘woolly’. Grieve attributes the French bourre to the Latin burre, or ‘lock of wool’ frequently found entangled with the plant where sheep have grazed.

Burdock might be a form of beurre or butter, which comes from a farm custom of wrapping butter in the large leaves to keep it cool. While the plant’s resemblance to docks, literally seen as a ‘dock with burs’, led to its name bur-dock.

Arctium lappa and Arctium minus

Lesser burdock grows up to 1-1.5 m tall with longer heart-shaped, dark green leaves and prickly flowers varying from pink to lavender in colour.

Largely the roots, but also the leaves and stalk.

Roots can be eaten cooked as a boiled or fried vegetable. It is more common in Asian cooking in Japan and China. The leaves and stalk can also be used as a wild edible salad vegetable.

Contains vitamin C as one of its most valued nutrients.

Primarily used as a blood purifier and as a herbal remedy for skin diseases and infections.

The large heart-shaped leaves were used as masks by actors in Ancient Greece. The prickly burs helped to inspire the invention of velcro.

May cause contact dermatitis in some. The plant is best avoided in pregnancy due to oestrogenic effects. Burdock may also interfere with some medications.