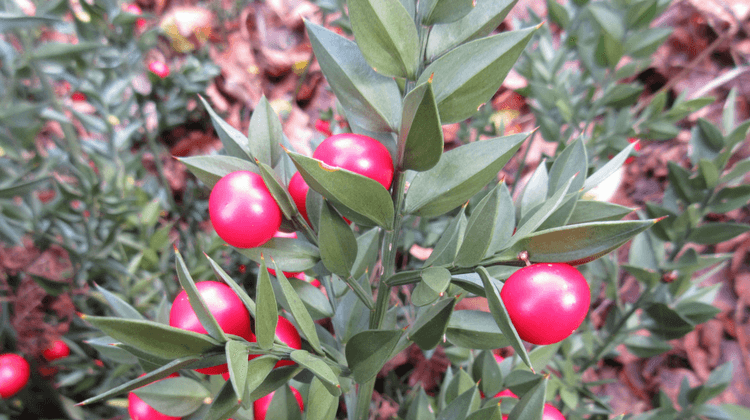 This weekend I wanted to make a coffee substitute, something that tasted ‘rich’. Something that I could ‘chew’ on.

My shop bought coffee-alternatives include the likes of Whole Earth Nocaf, Barleycup etc.

And when it comes to finding tasty “coffee” substitutes from the wild, I have always struggled with the more common substitutes such as dandelion or chicory.

Don’t get me wrong I really like them, but coffee isn’t the first thing that springs to mind when I sip on them.

No, I wanted something that actually had the deep rich smell of coffee, and that could, at a push, be a coffee analog.

Was there such a thing out there, beyond the human world, hiding in plain sight at this time of year? Some plant jiggling around trying to get me to notice it?

This year my attention has been caught by a prickly shrub called Butcher’s Broom (Ruscus aculeatus). It’s ‘leaves’, actually they aren’t leaves but I don’t want to get all botanical on you, are tough and thick and tipped with a vicious spine.

Take an eye-glass or botanical loupe and have a look at its flowers. Talk about beauty hiding in what likely appears to most people as a drab, plain plant.

Chances are you have walked past Butcher’s Broom many times.

The bright red berries possibly attracting you, while your brain over rides any desire to stop and pay attention as it screams “Poisonous Plant”.

Butcher’s Broom is part of the Asparagus family (Asparagaceae), and the berries are indeed poisonous. If eaten they cause digestive problems and a condition known as hemolysis; the rupturing or destruction of red blood cells.

Yet within the fruit are two seeds. In Tunisia these seeds are first boiled, roasted, then ground and used as a coffee substitute.

It was this fact that intrigued me. And so I went and gathered a few of the berries to see if I could replicate what they do in Tunisia.

Makes: For every 200g of fruits, expect around 80g of seeds.