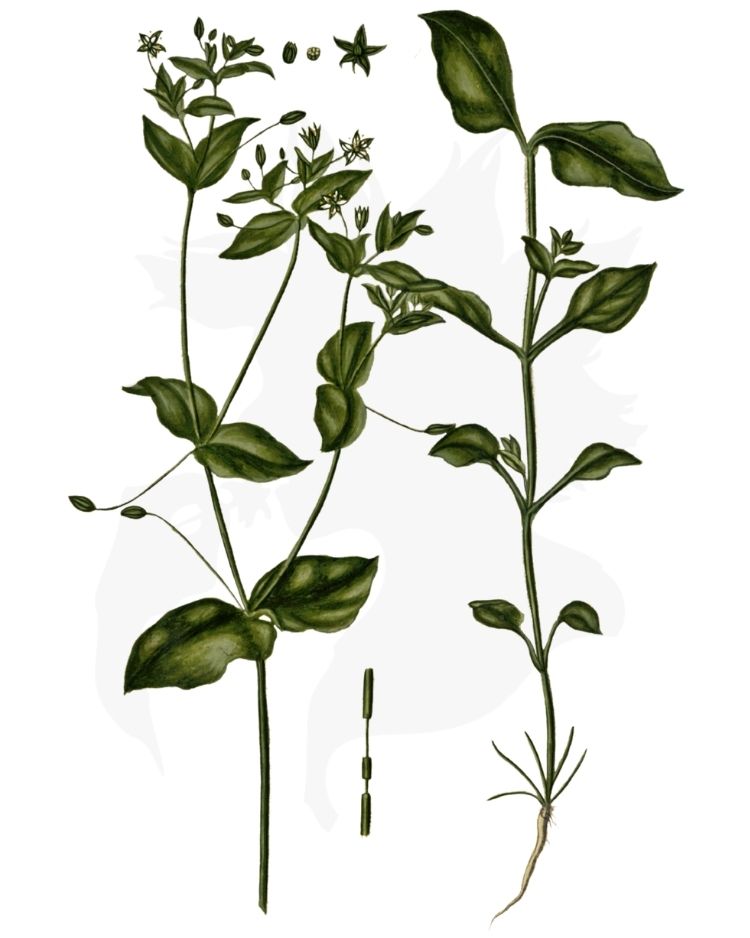 Chickweed is a familiar garden weed recognisable by its tiny white flowers. The seeds were once fed to birds, which is how the plant earned its common name. In pastimes, the plant was a common potherb and had various medicinal uses.

A fast-growing weed that covers the ground in clumps with leafy, hairy stems and bright green, egg-shaped leaves with pointed tips and smooth edges. The flowers are small, white and star-like, and the fruit are egg-shaped pod-bearing seeds.

Chickweed can be boiled and eaten as a green vegetable much like spinach. In the past, the plant was used as a potherb by farming communities in Europe and Asia.

The leaves can also be eaten raw as a savoury herb in salads and sandwiches, or chopped and added to soups, omelettes, stuffing, meatballs, pies or used as a garnish.

It is a good source of vitamin C. It also contains vitamins A and Bs, fatty acids and minerals.

Chickweed was widely used as an anti-inflammatory herb. For example, chickweed cream was used to soothe eczema, sunburn and insect stings as well as to draw out boils and splinters.

Chickweed may cause allergic reactions in some people. The herb is also best avoided during pregnancy and when breastfeeding because there is not enough information about its safety.

Kermath, BM et al. (2013) Food plants in the americas: a survey of the domesticated, cultivated, and wild plants used for human food in north, central and south america and the caribbean.