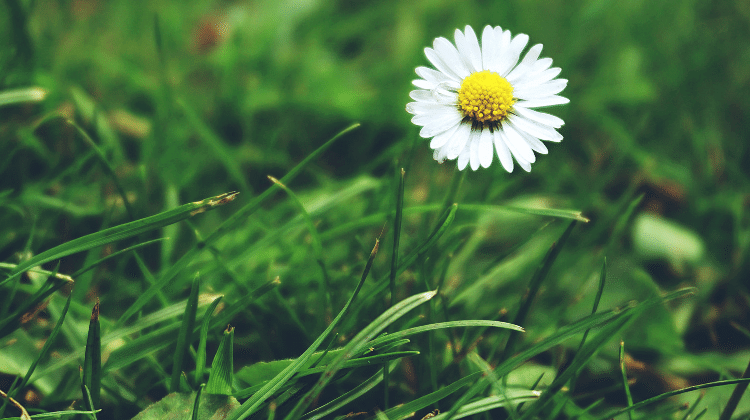 Daisy, a humble little flower that is widespread in many parts of the world. A children’s favourite for making ‘daisy chains’ or ‘fairy chains’, the daisy has also been used in food and medicine.

Flower-heads solitary on a leafless stalk springing from the root (a scape). The outer florets white, tipped with red, the inner yellow; the flower-bracts dark green and in one row; the stem 2.5cms to 20cms high, leafless; the leaves blunt, oblong, narrowing at the base (spathulate); and the root creeping.

Daisies are naturalised in many parts of the world. They can be found in Britain, Europe, parts of the Middle East and western Asia. As well as various states in the USA. They grow in meadows, grasslands, lawns, hills, woods, parks and gardens.

The young flower heads or buds can be added to salads, soups or sandwiches;REF or the flower heads used to decorate salad dishes.REF The leaves can be eaten raw despite their bitter aftertaste, but are better mixed in salads or cooked and might be used as a potherb. The buds can be preserved in vinegar and used in cooking as a substitute for capers.REF

It is both an anti-inflammatory herb and a vulnerary (improves circulation) herb. Drink daisy tea for the plant’s health-giving and restorative properties.REF A modern study of wild edibles used during the war in Bosnia and Herzegovina (1992–95) showed that daisies contain 34 mg of vitamin C per 100 g.REF

The plant was recognised as a medicinal herb from the 15th century onwards. The Flemish herbalist Robert Dodoens, or Dodonaeus, (1517–1585) wrote:

Daisies boiled in water, either the whole plant or just the flowers, and especially the small or wild (species), are good for fever, heating up the liver and all internal organs. This same herb in food or soups stimulates the movement of the bowels”.REF

By the 17th-century, B. perennis also had a reputation for broken bones,REF which is perhaps where it got the name ‘bone flower’. The English naturalist William Turner (1509–1568) knew it as ‘banwort’, “because it helpeth bones to knyt againe”.REF

In Irish folk medicine, the plant was used for all manner of conditions, as Gerard would have approved, including scrofula, tuberculosis, pleurisy, coughs, colds, headaches, stomach and liver complaints, and various skin problems from chilblains to ringworm.

It could be made into a lotion for weak eyes and an ointment for burns, as it was used similarly in other parts of Britain.REF

While it has been less admired for its taste, its pretty flowers are always a crowd-pleaser. Daisies can be frosted and sprinkled on cakes for decoration or added to a cup of boiled water for a beautiful tea.

Few side effects are recorded from the use of daisies in food or medicine. Use only in moderation. Some people can have an allergic reaction to members of the daisy family.