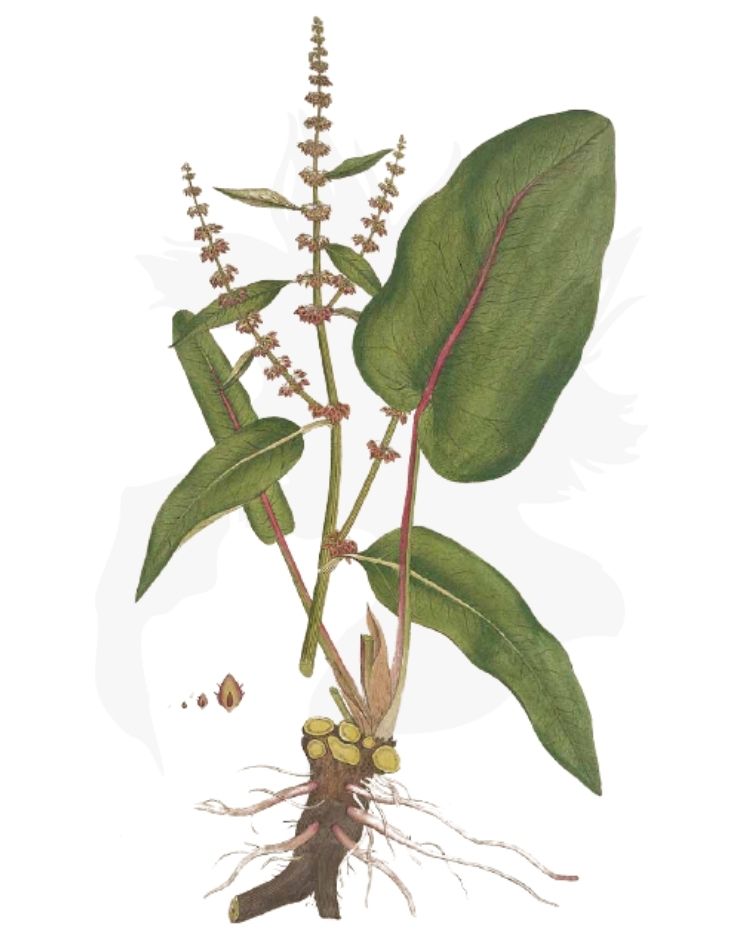 Docks have grown in Britain since three ice ages ago, and remains of dock have been found in places where people once farmed, such as the ancient Celts. Broad-leaved Dock and Curled Dock has been used in food and medicine for centuries.

R. obtusifolius has long, broad, oval- to lance-shaped leaves with small greenish flowers that turn red as they mature.

Both plants are native to Britain and Ireland and naturalised in North America.

They can be found on lawns, fields, disturbed or waste grounds.

They have a tart, lemon-tasting leaves and are used similarly in cooking. It is often agreed that the youngest plants are best and make a tasty ‘spinach’, while others find the taste ‘sour’ but ‘hearty’.

Serve the greens with butter, bacon, hard-boiled eggs and seasoning. The leaves can also be stuffed like vine leaves with a rice, herb and cheese filling. Dried they can be used as a seasoning for rice, potatoes, seafood or sandwich spread.

They produce large quantities of fruits and seeds, which can be boiled into a mush or ground and added to flour or meal for making bread, muffins and gravies. The stems of young plants can be chopped, simmered and sweetened with honey as a substitute for rhubarb pie.

Both plants are very nutritious. Curled Dock, for example, contains more vitamin C than oranges and more vitamin A than carrots. It also contains vitamins B1 and B2, and iron.

The leaves are famously used to soothe nettle stings and often grow nearby the offending plant. The cooling properties were also used to soothe insect bites and stings, as well as scalds, blisters and sprains.

They were a popular remedy for staunching bleeding or for purifying the blood. The juice from the leaves can be applied as a compress to heal bruises.

The seeds have been used to treat coughs, colds and bronchitis, and the roots used as a remedy for jaundice, liver problems, skin ailments, boils, rheumatism, constipation and diarrhoea.

Other Uses of Dock

Both plants contain oxalic acid which can be toxic if used in excessive amounts. Some text suggests they should be avoided during pregnancy and when breastfeeding. They can also trigger hayfever or aggravate asthma in some people.

No spam. Always one-click to unsubscribe.