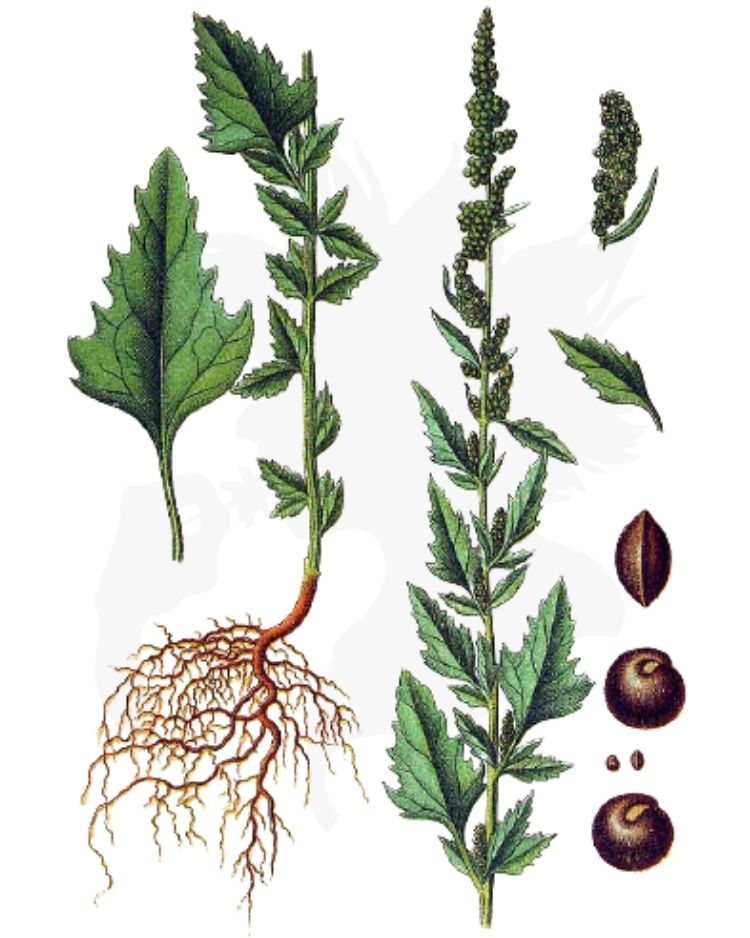 Fat Hen has been used in food and medicine since ancient times.

It was among the commonest wild ‘spinach’ and was eventually replaced in cooking after the introduction of spinach from south-west Asia.

Fat Hen is said to sometimes resemble dock (Rumex obtusifolius) because of its broad leaves and spikes of green flowers. It is, however, unrelated to dock.

Plants are annual or perennial with various flowering times depending on the species.

Chenopodium seeds are rich in starch. These can be ground and added to flour to bake breads, cake, biscuits, pancakes or muffins. Alternatively, add the seeds to salads, stir fries or use as sprouted seeds.

The leaves and young stem tips of Fat Hen can be used as a spinach substitute. The tender leaves can also be used to make salads, stir fries, sauces or pesto.

The water in which the tender greens are cooked can be saved and drunk as a nutritional broth or frozen as stock cubes.

The young budding flowers can be cooked and eaten by steaming and tossing in butter like broccoli.

Chenopodium greens are rich in protein, vitamins A, B1, B2 and C, and niacin, calcium, phosphorus, iron, and omega 3 fatty acids.

The seeds of some species are higher in lipids and nutrients such as calcium and magnesium than many other grains.

Chenopodium spp. are occasionally mentioned in old herbals as a treatment for an ailment of the times, such as scurvy, sores and gout.

The plant may still be used to treat inflammation, rheumatism or toothache.

The crushed roots can be used for soap or the oil obtained from the roots used as a skin emollient.

Fat Hen is high in oxalates (see here). The greens contain oxalic acid (oxalates) that could affect calcium absorption or which may cause mouth irritation when eaten raw or in excess. Avoid if you have kidney stones.

Some herbalists suggest that the seeds of Chenopodium may be toxic if eaten in excess. Others go further to say that the seeds should not be eaten at all because of their rich saponin content. They may pose a risk to people suffering from arthritis, rheumatism, liver disease or intestinal inflammations.