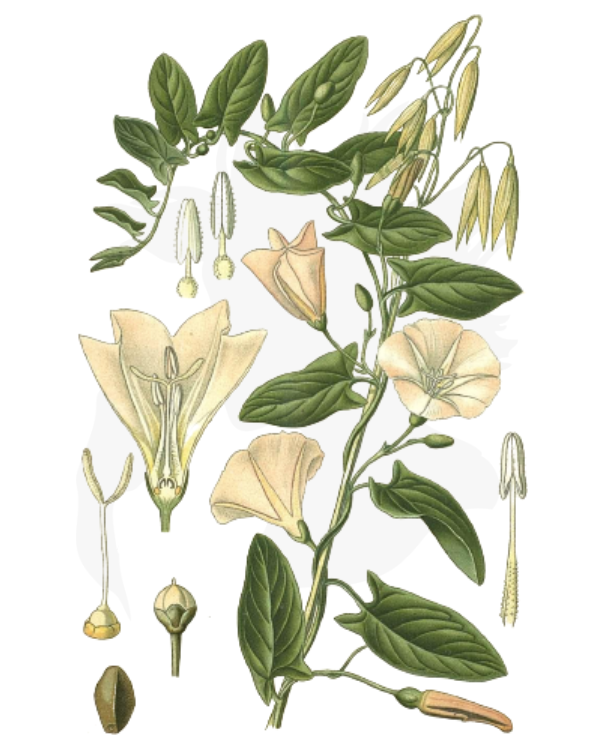 Just because a plant was used in the past as food does not mean that it is safe to eat. Borage and comfrey are classic examples of this. Obviously, there are many that are safe to eat. But when you see a warning on these plant profiles like this it is for a reason, consume at your own risk.

Recently a scientist from a French university contacted me. She wrote

“Here is an article about the distribution of ergot-alkaloids in different plant parts of several Ipomoea species, comparing untreated with fungicide-treated seeds to try to figure out how much was due to the plant (answer = probably some) and how much to the fungus (answer = more).

Admittedly I have found nothing on Convolvulus, but I suspect this means that nobody has looked, not that there is none.

The toxicity of Morning Glories was (in part at least) due to ergot-like producing micro-organisms that grow endophytically.

Because of this, since infection rates with these microbes can vary over time and space, but that some are very very toxic and disturbing, it may be best to avoid morning glories entirely.”

In Croatia, the leaves are boiled and eaten as a vegetable.

In China tender young rhizomes with a few young leaves are gathered from sorghum fields in early spring, then mixed with cracked wheat and ground beans and made into a thin gruel. They are used in very small amounts as too much will cause diarrhoea.

In Spain, in the regions of South Eastern Albacete and South Central Jaen, the flowers are sucked for their honey-like nectar. They are not eaten. In Palencia, the leaves are boiled before being added to salad.

In Turkey, they cook the leaves in with other vegetables.

In Ladakh, the leaves are eaten raw as well as cooked. The seeds are boiled in onion and tomato and then fried in oil before being eaten. Tender young leaves and shoots are boiled and washed extremely well with water before being mixed with curd in a dish called tangthour.

In Poland at the end of the 19th-century young shoots were gathered and boiled, then fried with butter, cream, flour or eggs.