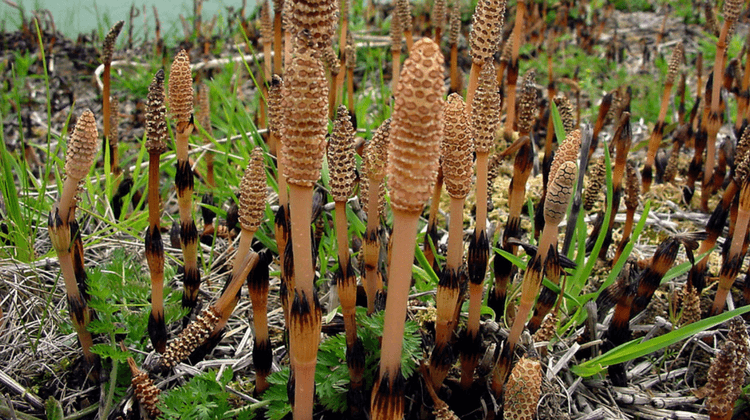 I have written this brief profile as a result of some confusion on social media as to whether Field Horsetail Equisetum arvense is edible. And to whether there could be a problem with consuming too much of it.

I list the research that I have briefly done, along with citing sources for traditional food use as well as any potential toxicity problems.

Horsetail to many foragers in the UK is considered edible. In this instance I am specifically referring to the use of Equisetum arvense, which can be confused with Equisetum palustre (potentially toxic, see Mills and Bone) and Equisetum pratense.

Caution is advised to make certain you are harvesting E. arvense. Note: It is illegal to dig up roots without landowner’s consent.

And even then there has been little research conducted on long term consumption of this species.

It has however traditionally been eaten around the world. Most notably in Japan and by Native American cultures.

Facciola writes “In Japan the young spore bearing stems are boiled and eaten as a potherb. They are also simmered in soy sauce and mirin to make a dish called Tsukudani.”

According to Uphof the Kiowa Indians used the base of the plant as food.

A problem in a lot of the ethnobotanical literature is how one interprets what the writer is meaning.

“The base of the plant” could mean different things to different people. Even if to you it sounds obvious.

An example of this is an author who states that the roots of E. arvense are edible raw.

I decided to check his source material, as I own the very same edition of the book he cites.

Nowhere in the eight line description of the uses of E. arvense does it say the roots can be eaten raw.

It is purely an assumption on the part of the author. What it actually says. And I quote it word for word is this “… and the rhizomes are eaten by the Indians of N. Mexico.”

Either I am missing something or the author has a serious case of “observer bias”! 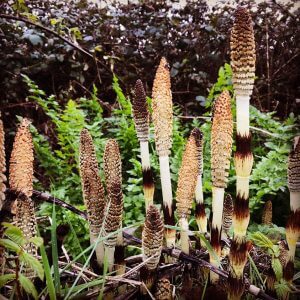 According to Kari the tubers are eaten. We don’t know whether they were cooked or consumed raw.

A section in Ethnobotany of the Eskimos of Nelson Island mentions the following “E. arvense L has black edible nodules attached to its roots. The effort of collecting them is considerable and therefore rarely done. However, these nodules are often obtained from underground caches of roots and tubers collected by lemmings and other tundra rodents. These caches of “mouse nuts” are raided by the Eskimos and eaten.”

Turner tells us the tender young shoots were eaten raw or boiled by the Saanich. They were thought to be “good for the blood” as well as nourishing.

According to Sudan, E. arvense was reported to cause skin dermatitis in people allergic to tobacco smoke.

Mills and Bone state, “Theoretically, excessive consumption of horsetail (note: they are referring to E arvense) may lead to thiamine deficiency (deficiency of a vitamin), decrease of body potassium content and nicotine toxicity. Has been reported to cause dermatitis.”

They also mention that “Toxicity is possible from eating large amounts of E. arvense“.

What Does Robin Do?

CONSUME AT YOUR OWN RISK!

“Equisetum arvense” by F. Lamiot is licensed under CC BY 2.5