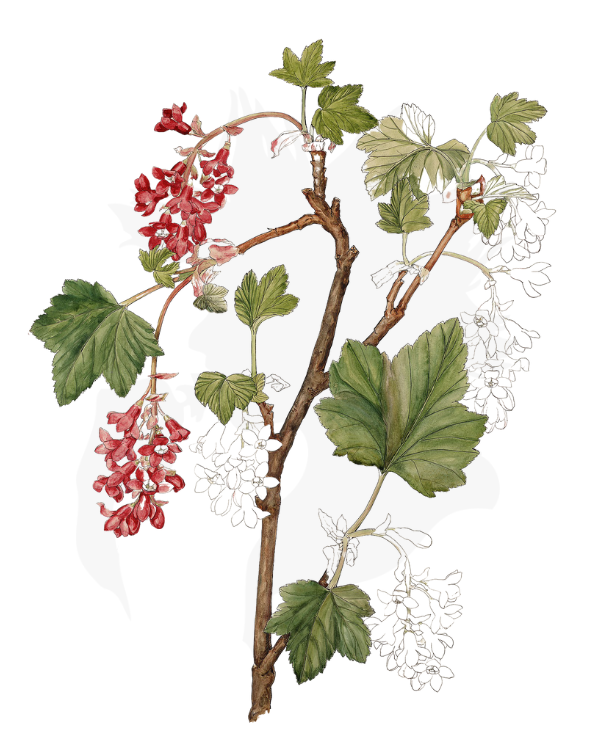 This is basically red flowering current (Ribes sanguineum), and you may have seen it around, but not really paid attention to it. It is absolutely beautiful. I first discovered it quite a few years ago when I was working with a chef in Edinburgh called Paul Wedgwood. If you don’t know Paul his restaurant (Wedgwood the Restaurant) is in Edinburgh. So check it out because he’s a really, really good chef and a lovely, lovely guy.

So what he had done was he had taken the blossoms and put them into kind of a trifle, which normally when people say trifle to me, it’s kind of the pits and almost as bad as boiled cabbage from the 1970s when everything was boiled to death, The actual blossoms themselves are fantastic and you can make delicious syrups with them.

The way that I like to work with them is to pour some honey into a bowl and put that in a saucepan with a bit of water around it. It’s known as a bain-marie. Warm it and obviously put the blossoms in as well.

The leaves themselves are really, really highly aromatic and I haven’t done it yet, but I’m going to dry some and see if that scent stays. The other way of working with the blossoms is to put them in ice cubes, freeze them in ice cubes, and then have this beautiful botanical bling to jazz up your drinks.

The flavour and the smell are very delicious and highly aromatic like I say, so I’m just going to get a bit of the leaf now. The very young leaves are very sticky. They are very resinous and for those of you into your flower essences, if you believe in all that stuff, flowering currant is meant to be good for melancholy.

The leaves are not something I would put in a salad, but they are very aromatic and herby. I’ve only really worked with the blossoms and flowering currant is one of those plants you just want to keep smelling it. It’s lovely. So give it a go.