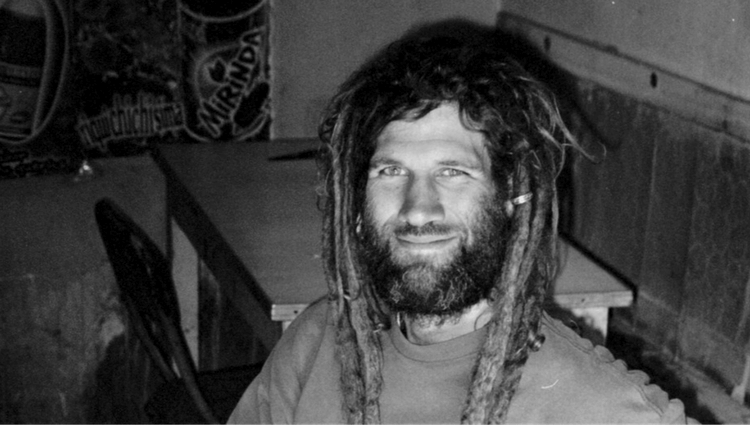 I am deeply saddened by the news that Frank Cook (plant teacher and herbalist) died on Wednesday, 19th August 2009.

I met Frank Cook while filming him in September 2008, that meeting and numerous email exchanges had a life-changing impact on me.

His gentleness and depth of plant knowledge was truly inspiring, and it was via these e-mails that he always encouraged me through Eatweeds to spread the plant knowledge.

Frank Cook was an herbalist, teacher, botanical explorer, activist and pollinator who turned people on to the abundance nature provides and the ability to self-actualize.

He considered himself a citizen of the world. We considered him to be an herbal extraordinaire, green wizard, botanical genius and Gaia-loving prophet of emerging planetary medicine and transition cultures. He touched a large number of people and instilled in them a deep love of the natural world as well as an empowered sense of self.

For the last fifteen years of Frank’s life, his passion for living consciously and simply led him to become a repository for plant knowledge. He studied internationally with herbalists, shamans, vaidyas, green witches, doctors, professors, and medicine men and women around the world who initiated him into many ways of understanding plants as medicine.

During that time, Frank led hundreds of workshops on re-skilling, specifically through plant identification and relations. He facilitated mead circles, taught at schools and in homes, gardens and the woods, spoke at conferences, and played a prominent role at educational gatherings around the world.

He was a phenomenal teacher. After hearing Frank share his way of seeing the world, many were inspired to connect with nature in some way – to eat something wild everyday, let your food be your medicine, practice simple living, show up on plant walks, make mead and wild ferments, or create your own herbal remedies for the family.

Frank taught us all the edible plants in our yard and woods. He showed us what plants were medicine and gave us medicine he had made from them. He awakened the herbal movement and graced our communities with old knowledge of traditional healers, reminding us to appreciate the whole plant and see plants as our allies. He encouraged us to think of local analogue plants to replace the endangered, over-harvested species of the world, and to walk the green path.

But Frank Cook did more than just enlighten us about plants. He expanded our minds and aroused higher consciousness: through his travel journals, his botany talks, his way of living by donation, and by taking us to our edges, and asking questions like, “What plants will be with us in this planetary culture rising?”, “How will you show up to help your community transition into these changing times?” and “How can we best move forward?”

He firmly believed that we are in the midst of great changes on the planet and that it is our awareness and daily choices that will determine what quality of a future we have as people of one interconnected world. Frank spoke often of how we were quickly becoming one world. His central questions in this respect were: “What plants will be in our global gardens and stories?” “What will our global healing system look like?” “ What are the roles of the human species in the web of life?”

Frank was very much alive when he passed, full of visions, work and inspiration. He was known to say, “I am done with end users,” meaning that as we learned this knowledge and way of being he was teaching, it was now our responsibility to pass it on.

Pearson Garden, Asheville NC, August 19, 2009. Just hours after his passing, Frank’s brother Ken spoke from the circle of nearly 200 friends holding hands around the garden. “I think he saw us all as plant beings and he certainly was one himself.” Muffled laughter mixed with tears. Frank Cook was the Banyan Tree.

If the name is not familiar, you’ll remember the man. Frank stood 6’3” tall with piercing blue eyes and waist length dreadlocks. He wore simple clothes and sandals and carried a satchel over his shoulder. In Chapel Hill, his home was a loft bed at the residence of Beth Williams and Alan Dehmer. He walked everywhere, once across the entire state of North Carolina, foraging for food along the way. Most of us in these modern times would die attempting such a trek. Frank feasted – both physically and spiritually.

Someone once said that we are born with two beings – one that dies and one that lives forever. That is certainly true for Frank Cook. Frank will always be known around the world for his plant knowledge and his journey to “meet” the 5000+ genera of plants. At 47 years old, he was 70% of the way to his goal. He’d chucked a promising career in computer science 20 years earlier to follow his heartsong, traveling to Namibia to meet Omumborombonga, the ancestral tree of life, and to India to meet Buckuchurbu, used to treat stomach upset.

Those of us lucky enough to cross His path were reacquainted with the native plants we loved as children. Frank could hang with the best Linnean taxonomist, but he “understood” plants more deeply – their medicinal qualities, their nutritional values, and their unique role in the interdependent ecology of nature. And he clearly loved them.

Frank would lean down and shade his small subjects with large hands and begin telling their story. The breath from his deep baritone voice seemed to lift the plantain or pipsissewa from its roots, as he brushed the leaves from around their base. “Choose me, choose me,” you could imagine them saying. In those moments, we were children again, finding a long lost love. And he was an “indigenous” teacher.

The meals between walks were just as vibrant. Reminding us that most Americans eat just 25 species of plants a year, he’d make fresh bread and soup with at least 25 species gathered during his walk. The flavors and energy in his food were life giving. He’d make teas by day and meads at night, always sharing a batch from last year in a pass- around bottle. Frank’s blueberry and sumac meads were my favorite. His gatherings built benevolent communities — families with native knowledge and skills.

His “business model” baffled most. He worked for donations. You paid what you could, and that was enough to fund Frank’s travels to meet plants across the globe. He’d recently completed a Masters Degree at the Schumacher Institute in the UK and written a book titled “Emerging Planetary Medicines.” His subject matter had expanded to include “transition cultures” – those preparing for not a low-, but a no-carbon economy.

Frank had just returned from teaching engagements in the Southwest US, and before that in South America. What he thought was travel weariness was apparently a spreading parasitic infection, which spread rapidly this week and this morning claimed his sinewy body. Thousands around the world, and several hundred in Carrboro, Chapel Hill, and Asheville weep quietly at the loss of their friend and teacher. We are ever so grateful for his many gifts, for the many seeds he planted.

If he’d ever stayed in one place for more than a few months, I’m convinced that Frank’s cascading dreadlocks would have taken root, like the Banyan Tree, and grown other Frank Cooks. And if so, what a better world this would be. Then again, as I looked around Pearsons Garden this damp August night and reflected on past gatherings at LEAF and Pickards Mountain, I thought…that’s precisely what has happened.

More Information On Frank Cook Can Be Found At…