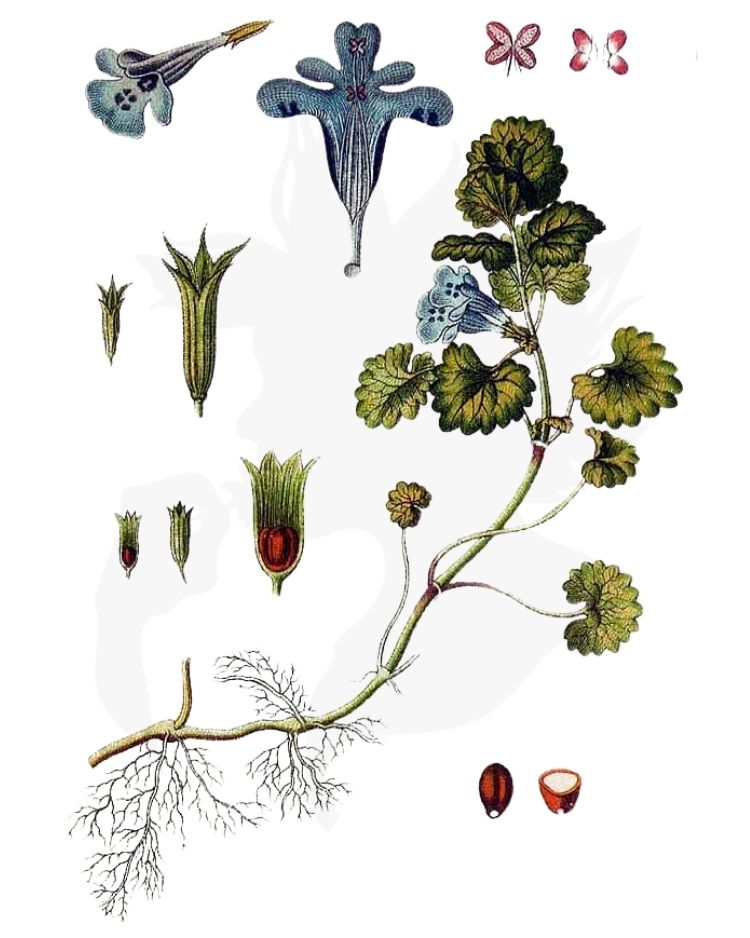 Ground ivy is one of Britain’s commonest plants. It flourishes from sunny banks to shady wastelands. A perennial plant with trailing dark-green, kidney-shaped leaves that retain their year-round colour. Its bluish flowers with a purple tint are seen in summer and autumn.

The common name is misleading because it is not a true ivy. However, the plant has a plethora of other names from which to choose: Gill-go-by-the-ground, Lizzy-run-up-the-hedge, cat’s foot, devil’s candlesticks and alehoof among a few.

It was not considered particularly friendly to its countryside companions being known to drive off other plants that grew near it. It was avoided by cattle and feared toxic to horses.

It was a favourite ingredient in spells and magic, because it grew so readily in graveyards, ruins and shady places thought frequented by witches. The plant’s strong association with witchcraft might explain why country-folk believed it drove away other flora.

Despite its dubious character, Chaucer, in the Nun’s Priest’s Tale, describes it as “ground ivy that makes our yard so merry”.

This ground cover plant grows up to 0.2–1 m high. The kidney-shaped leaves are trailing and evergreen, and the flowers are blue-purple with four-sided stems. The roots are creeping and prevent other plants from growing closely.

In pastimes, the plant was used in brewing to flavour and clarify the beer. A tea, called gill tea was also made with ground ivy by steeping the plant in boiling water and sweetening with sugar, honey or liquorice.

The leaves and stem have an aromatic flavour and can be used to flavour soups and sauces, or egg or meat dishes in place of mint or thyme. The young shoots and leaves have also been eaten as bitter greens, like spinach, or added raw to salads.

There is little data on ground ivy’s nutritional content.

There are claims that the wild herb has been drunk for medicinal purposes. Ground ivy-infused ale or beer was said to ‘clear the head’ – its expectorant action being good for coughs and colds. The plant was largely used to clear headaches, congestion, coughs and colds. An infusion of the herb or the expressed juice was also used to treat eye disease or injury.

In the crossover between Pagan and Christian traditions the plant was part of Green Thursday or Maundy Thursday celebrations. A crown of green ivy was worn as people danced at night on Green Thursday to celebrate nature’s return in spring and to reaffirm their connection to the old gods. Ground ivy was an important ingredient in Maundy Thursday soup, a day that starts the holy three-day period before Easter Sunday.

Ground ivy is suspected of poisoning grazing animals, such as cattle and horses, who are perhaps more at risk of excessive consumption.

There is limited data on the plant’s toxicity in humans and best to avoid during pregnancy or when breastfeeding as a precaution.