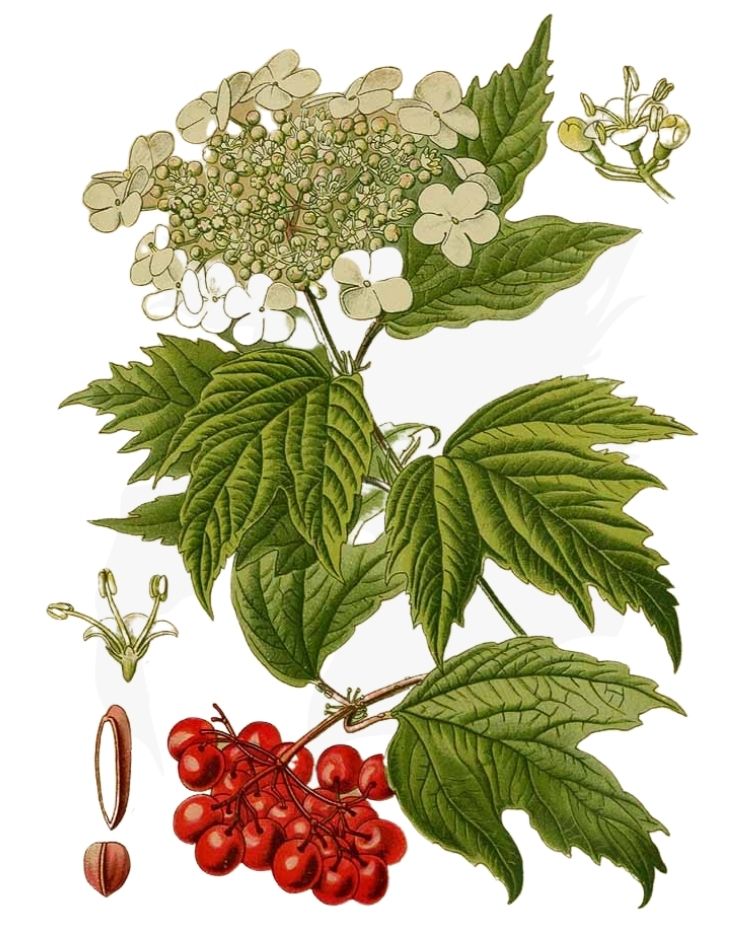 The plant bears fertile flowers that are pinkish-white in the bud and produce red, glossy drupes, while the sterile outer flowers are white, large and plate-like. The stem is slender and the leaves are divided into three or five broad angular lobes, sometimes toothed and turning purple in autumn.

Fruit. Best picked after a frost but freezing will achieve the same thing as it breaks the cell walls and sweetens the fruit.

A deciduous shrub, flowering in midsummer with fruits appearing in late summer.

Can be used as a replacement to shop bought cranberries.

The fruits have been eaten in traditional dishes in parts of Europe and in Russia. In Russia, the fruits were eaten fresh, added to porridge, baked, made into jams, jellies, marmalades, pastes, mousse, pie fillings, vinegar and condiments.

The fruits were also used as a substitute for tea or coffee.

The bark of guelder rose is antispasmodic and sedative. It has been used by women to calm menstrual cramps for hundreds of years, but there are no clinical trials about its use.

The bark has been used to treat very painful menstrual flows (such as dysmenorrhoea), endometriosis (a painful condition when pieces of the endometrium grow outside the uterus in the pelvis or abdominal wall), or fibroids.

While the plant has had many other uses in herbal medicine, its primary use is as a muscle relaxant. To this end, the bark can also be used to relieve hiccups, and pain and spasms in muscles, stomach and intestines.

The guelder rose is often grown in gardens as an ornamental plant. In Ireland, the variety that features large, white, sterile flowers, ‘Snowball Tree’, is particularly popular.

Some sources suggest that guelder rose is toxic, particularly when the berries are eaten in excess, causing stomach upsets or worse – symptoms of poisoning.

However, there is no conclusive opinion and few data on the plant’s toxicity. Seek medical advice before use. The herb is best avoided during pregnancy and when breastfeeding.

Paine, A. (2006) The healing power of Celtic plants: their history, their use, and the scientific evidence that they work. Winchester: O Books.

Shikov, A. N. et al. (2017) Traditional and current food use of wild plants listed in the Russian pharmacopoeia. Frontiers in Pharmacology. [Online] 8841.