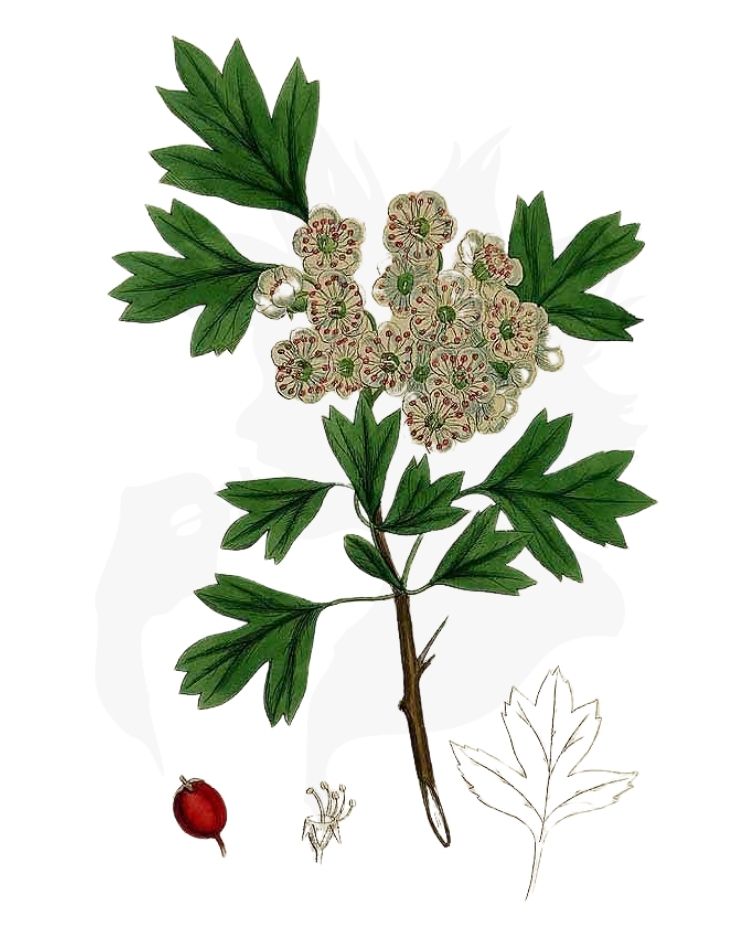 Common hawthorn in blossom is a familiar sight along hedgerows, woodlands and scrubs in spring.

It was famously known as the May-Tree or may-blossom for it was said to flower in May, and it once played a large part in May Day festivities.

Today it is no longer a fairy tree but it is a useful plant to herbalists and foragers of wild edibles.

A tree reaching up to 13 ft; it takes around 20–50 years to reach its ultimate height. The bark is deeply fissured with orange lower layers and greyish-brown upper layers. The spiny twigs are stiff red-brown or greenish with brown buds.

The leaves are long, roughly oval and lobed into three segments, dark green above and paler below with a tough feel, the stem is tinged pink. Flowers are five-petalled and white (although sometimes described as creamy and tinged pink); they appear as flat, spraying clusters. Dark red berries appear in autumn.

The young leaves and shoots of common hawthorn are edible and were once known as “bread and cheese”.

In some parts of Portugal, children were given haws to eat because of their high nutritional content.

Hawthorn has been described as “nutrition for the heart” being widely recommended in herbal medicine for heart complaints.

Other Uses of Hawthorn

Common hawthorn remains a frequent shrub of hedgerows in Britain and is an effective barrier against livestock and humans thanks to its thickly twisted, thorny branches.

The tree’s finely grained and tough timber can be used for engraving, carpentry, furniture, boxes and even boat parts.

The haws, or berries, may cause a mild stomach upset.

It is advised that the herb is avoided by pregnant or breastfeeding women; although other sources suggest that there have been no adverse effects caused by hawthorn in pregnancy or when breastfeeding; it is still best to exercise caution.