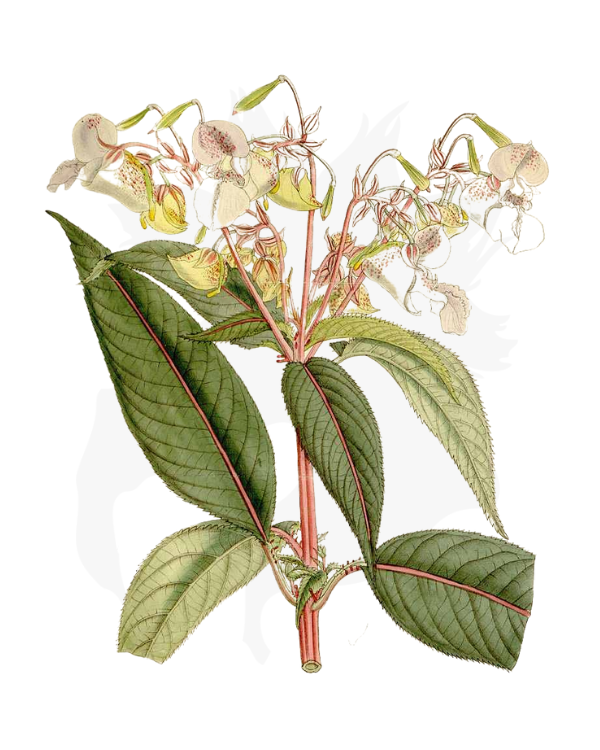 When a beekeeper opens the hive to see that many honeybee workers bear a strange white stripe, he knows that the colony has been foraging on Himalayan Balsam.

The plant tempts the honeybee with its sweet nectar and provides a rich crop in summer. But as the insect crawls inside the flower, its sticky stamen leaves a white stripe on the bee’s thorax.

Often seen as an invasive species, Geoffrey Grigson generously describes the arrival of Himalayan Balsam in the UK:

Introduced in 1839, it was cultivated at first as a greenhouse annual by gardeners who never imagined the career ahead of it.

Today, this native Indian plant may be a familiar sight along rivers and stream banks.

The prolific flowers of Himalayan balsam are displayed as pink to purple on thick, fleshy, red stems, with fruits later appearing as a capsule. The leaves are dark green and lance-shaped.

Himalayan Balsam is thoroughly naturalised in the UK and comfortably at home on borders, river and stream banks.

The seeds can be eaten raw and taste like nuts.

The flowers have cooling properties, and the leaves have been used to soothe burns. In addition, the seeds are diuretic, and the root juice treats hematuria (blood in the urine).

A varnish can be made from the seeds.

The plant is exceptionally high in calcium oxalates.

Watt, G. & India. (1889) A Dictionary of the Economic Products of India. Calcutta: Printed by the Superintendent of Government Printing.