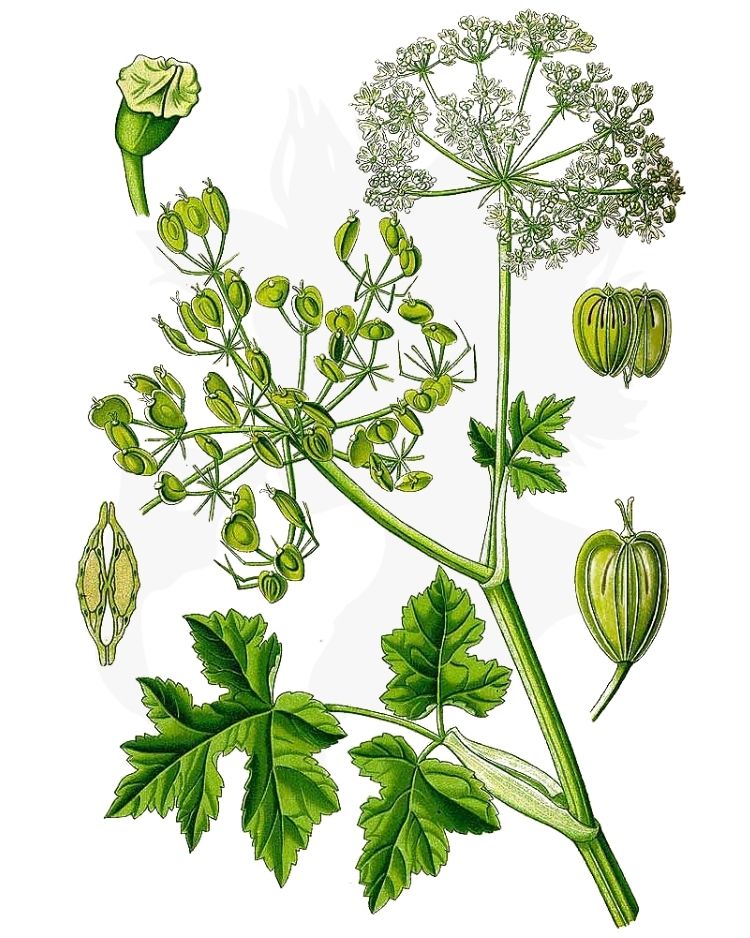 This plant is not for beginners. Never eat raw. Always wear gloves when gathering. Please read the important Safety Notes below.

Hogweed (Heracleum sphondylium) has enjoyed a reputation as both an important wild vegetable and a noxious weed.

The common name hogweed refers to its popular use as fodder for livestock, particularly pigs, which might in part be due to its abundance in the countryside.

“The leaves are collected and given to pigs, who quickly fatten upon them; hence the plant is called Hogweed.”

It is also a popular plant for insects, and its flowers are known to attract around 118 different insect visitors.

The plant’s other well-known name of cow’s parsnip was invented by William Turner (1775–1851) who wrote:

“It may be called in Englishe Cow-persnepe or rough Persnepe”.

Umbrella-like clusters of dirty white or pink flowers with bright green leaves. The hairy covering of the leaves are said to be a defence against insects. The stem is also hairy, hollow and deeply grooved. The reddish roots have an aromatic scent.

The whole plant can be boiled and eaten as a vegetable or potherb, in particular the leaves and shoots, which are said to taste like asparagus.

The leaves can be fried, or braised, in butter and become crispy as the plant sugars caramelise.

Older leaves can be chopped up and used to make a stock, or to add flavour to dishes in the same way as bay leaves.

The young shoots also can be fried in butter or boiled for a light supper.

The flower buds can be cooked and served like broccoli with butter or white sauce.

The seeds have an orange-cardamom flavour used to spice puddings and syrups, or added to bean dishes when green.

The roots are also strongly aromatic and can be prepared as a condiment or flavouring to other dishes.

Hogweed contains 105 mg of vitamin C per 100 g of fresh plant, in this case the leaves, while also containing 3.25 g carotene.

Hogweed was a folk remedy for many common complaints, such as jaundice, warts and sores.

The juice was applied to warts and the pollen was dusted on sores.

The seeds and roots were also boiled and drunk to treat liver problems and jaundice.

In Irish folk medicine, hogweed was a traditional remedy to stop bleeding.

The hollow stems were once used as a cigarette substitute and smoked by gypsies.

Hogweed is a member of the celery family, so if you have an allergy to celery tread very cautiously.

Never eat this plant raw. Always cook it until soft.

Hogweed is known to cause photosensitive skin reactions, such as blistering, because of the plant’s furanocoumarins.

Some texts list the plant as an emmenagogue, meaning it promotes menstrual bleeding, thus it is best avoided during pregnancy.

Irving, M. (2009) The Forager Handbook: A Guide to the Edible Plants of Britain. London: Ebury.

Pieroni, A. (ed.) (2014) Ethnobotany and Biocultural Diversities in the Balkans: Perspectives on Sustainable Rural Development and Reconciliation. New York: Springer.