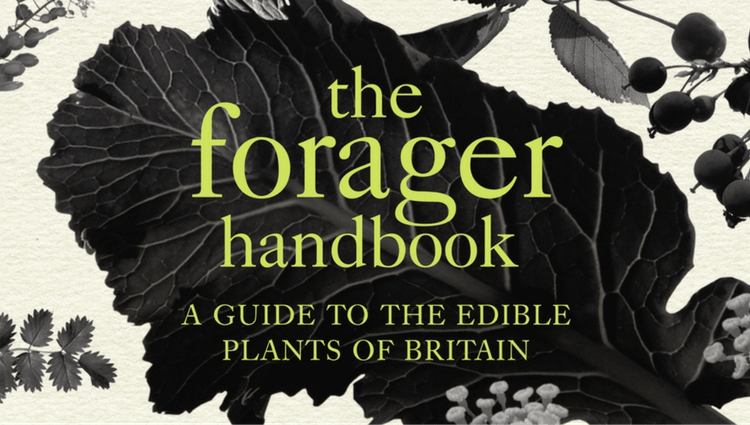 Miles Irving popped round to my house with his family for a ‘cuppa’ on his way back from Cornwall the other day.

I managed to persuade him to take 10 minutes out and give me an interview.

Listen as this master forager discusses his outlook on wild foods and foraging and then goes on to talk about his latest book The Forager Handbook, which some are calling the new Food For Free for the 21st Century.

ROBIN: OK it’s Robin Harford from EatWeeds.co.uk, and I am sitting here in my garden with Miles Irving who is the author of The Forager Handbook.

Miles, so tell me, about wild food, why do you think that foraging and wild food is so important. Why can’t people just go in to a veg shop and eat from the veg shop?

MILES IRVING: I suppose it’s the quality of the relationship between yourself and every other part of the process that results in having food on your plate.

That’s one way of looking at it from a positive point of view. And if you look at it the other way round, what happens in the food chain with stuff that you buy, there’s obviously all sorts of issues there that you are managing to side step and avoid. Like food miles and the use of agricultural chemicals and so on to produce those vegetables.

And lets face it, to just how fresh it is. I mean how fresher can it be that you go out and pick something and either eat it on the spot or take it home and eat it later that day. It’s about as good as it gets from that point of view.

And then I suppose the other thing is nutrition. We find that those plants that have been analysed for nutrition, on the whole, the wild ones seem to have far more nutrients in them than anything that you are going to buy in the shops, so I guess that’s quite a bundle of reasons.

You’re getting involved that’s the thing. I suppose that’s the strongest word that I would say about it really, in terms of the experience of gathering wild food is that you are involved. You’re involved in the place, you’re involved with the life cycles of these other species.

I think the problem with virtually everything that’s negative about our modern way of life is the un-involvement, the kind of putting up of barriers, the putting up of mediation of one kind or another between you and another thing or another person.

ROBIN: Mediation is a good word, we become spectators haven’t we?

ROBIN: So do you see foraging as quite an empowering process?

MILES IRVING: I think it is profoundly empowering, and life enhancing really. I’ve kind of banged on in the book a bit about how we are still hunter-gatherers. That’s one of my favourite trains of thought about this. Because you know, our genetics and our biology haven’t changed just because we have been sowing wheat and herding domestic cattle for 10,000 years. It hasn’t altered our make-up. So I think there is something about it, not that we can all go back to a traditional hunter-gatherer society, of course we can’t. But to make moves back in that direction is in keeping with who we are I think, and what our bodies are made to do, both in terms of nutrition and what you end up feeding yourself.

But also the kind of stuff you end up spending your day doing, like just being aware. Keeping your eye on the growth cycles of plants and noticing things about your landscape. That’s what our psychology is made up to do, amongst other things obviously, but it is very fundamental because most life hinges on the ability to obtain resources. And of course we obtained all of our resources by finding and using things for how ever long we were here before we farmed, possibly 190,000 years.

We are certainly not fulfilling the capacity that we have to be tuned into our environment, and I think that’s something that makes you more alive. To actually be sensitive and responsive to what is going on around you.

The fact that for most people most of the time what’s been going on around you has been predominantly biological. Other species, you know. Whereas now living in cities and living in houses where there’s not living things. You know if you don’t go out all day, and you haven’t got your house full of house-plants. Whereas before people would have been all the time out there, hearing the sound of the wind through the trees, smelling things, touching things, you know all of that. I think that is doing something to our psychological well being, that we don’t have that.

That is the main characteristic I can think of people who get into wild food and foraging. I think they are already people that care about their surroundings. But the more you do this, the more sensitive you get I think, and the more involved. If you are involved with something you care about it you look after it, and all that sort of thing.

MILES IRVING: Stewardship exactly, yeah. It’s changed me profoundly just in the last few years that I have been doing it professionally. You’d think it would be the opposite, as soon as something becomes about money it becomes mercenary and hard headed and all that sort of thing. But I just haven’t found that. It’s stepped up my involvement, that’s the thing. Because I’m more involved, I’m more aware. Obviously I’m receiving hard cash for what I do. But it’s still absolutely breath taking to go to this place that you haven’t been to for a year because it’s a bit of a journey, and you go there when you know there is something in season. You just go back to this place and you just feel a part of it because of last year and the year before that.

These kinds of rhythms and cycles and things which people obviously would have felt, even agriculturalists would have felt it, but there is something a bit more breathtaking about the rhythm and cycle that you actually have no control over. But that you are just tapping into, and participating in.

ROBIN: Let’s move on to your book, The Forager Handbook. How do you see it in the kind of library of wild food books that have gone before?

I feel what Richard Mabey’s book did, because he’s such a gifted writer, I think he captured people’s imagination and inspired people with the idea. There were loads of wild food books around at that time. It wasn’t like he thought of this great new subject to write about. Loads of wild food books came out, but his is the one that stuck, just because it is so inspirational.

But at the same time it’s not that comprehensive in its scope. Nor is Roger Phillips’ one. Roger Phillips is obviously a photographer first and foremost. Those great pictures of these gorgeous dishes in context, you know, lovely. And also he dug up some great historical stuff.

I suppose the strongest thing that we’ve got in my book is the contemporary use and the fact that you do get told something helpful about all of the plants.

That partly came from people that were giving us feedback while the book was being written. Because they said, “Look, that’s the thing that excites me so much, the idea that we can actually go out and find something, and be able to reproduce a restaurant recipe. Instead of thinking this is exciting that we’ve got this, but we don’t know really what to do with it.”

And that confidence that you have knowing that this is a recipe that worked, that people bought and then bought again, and I think it just elevates the status of it from this desperate measure that you take because you’re skint or you got lost in the woods or something like that. Or you are just trying to prove that you could if you did get lost in the woods.. all that stuff.

So I think it is great for people to have something that they can do with all of the plants. And then we’ve just expanded the range of things.

ROBIN: Because it’s not just wild edible plants it’s also includes cultivated flowers like day lilies and stuff like that?

MILES IRVING: Strictly speaking they are all wild in the sense that they must be naturalised. If it doesn’t appear in the Atlas of the British Flora then it is not in the book. So even if it is in there as a naturalised garden escape, if the Botanical Society are recording it as a wild plant, then I class it as a wild plant.

One of things I find most exciting about wild food, apart from all this glorious kind of back in touch with the land stuff, which obviously I do feel is very valuable and important, but also I just love the idea of a neglected resource being put to use. So that’s why I definitely don’t feel purist about say a day lily or anything else that’s jumped over the fence, because I think, well there it is, let’s use it.