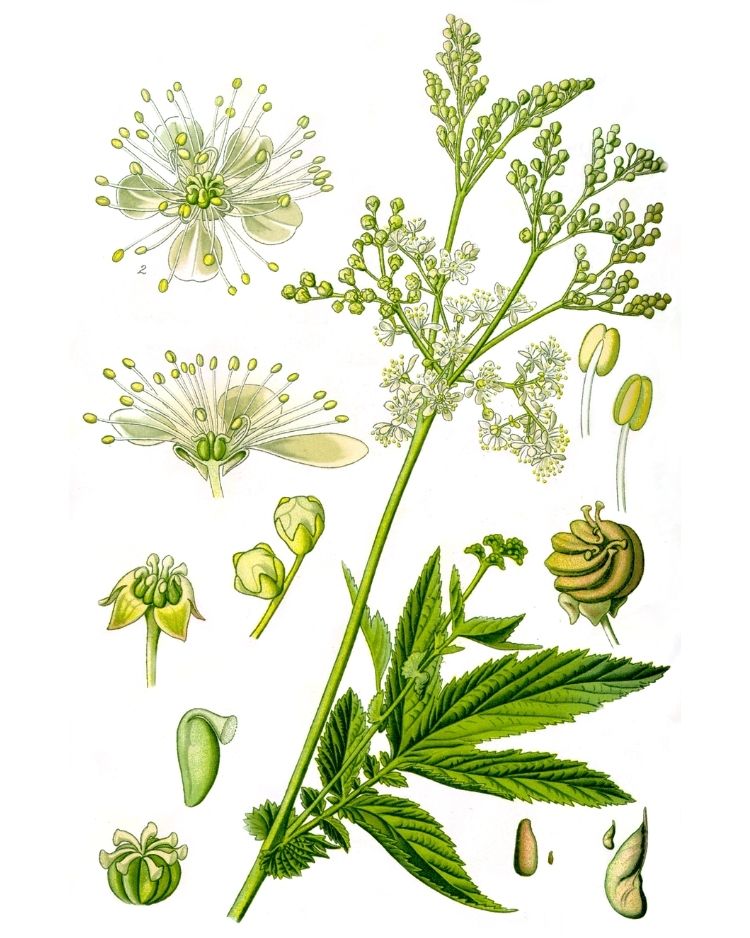 Sweetly scented meadowsweet was famous as a strewing herb and as a flavouring for mead.

It later gained recognition as one of the plants that contain salicylic acid, from which is derived aspirin and has been used for many of the same complaints for which aspirin is used today.

The tall stems are furrowed and sometimes purplish, and the leaves are dark green on the upper side and downy whitish underneath. The fern-like foliage with tufty, creamy-white clusters of flowers bears tiny, dry capsules as seeds.

Found in damp meadows, drainage ditches and alongside lakes and rivers. Britain and Ireland, temperate parts of Europe and Asia. Introduced to North America.

Leaves, flowers, roots; all parts of the plant have been used.

Meadowsweet was famous as a honey-wine herb. Meadwort, or Medwort, was one of fifty ingredients in a drink called ‘Save’ mentioned by English author Geoffrey Chaucer in a Knight’s Tale. English physician and herbalist Nicholas Culpeper also recommended a leaf of meadowsweet in a cup of claret wine to give it a “fine relish”.

Today, meadowsweet is also one of thirty herbs and spices added to the popular Norfolk punch cordial drink, originally made by the monks of Norfolk, England.

All parts of the plant can be added to soups, sauces or stewed fruit for an aromatic flavour.

The bitter roots have been used as a tea substitute along with the leaves and flowers.

Meadowsweet is considered a good example of the old adage ‘let food be your medicine’ thanks to its reputation for soothing overactive stomachs and treating coughs and colds.

Meadowsweet’s most famous claim to medicinal success is as a forerunner of aspirin.

Despite its acclaimed success, Foster and Duke warn that all salicylic-containing plants should be used with caution given that salicylic medicines can thin the blood and cause internal bleeding.