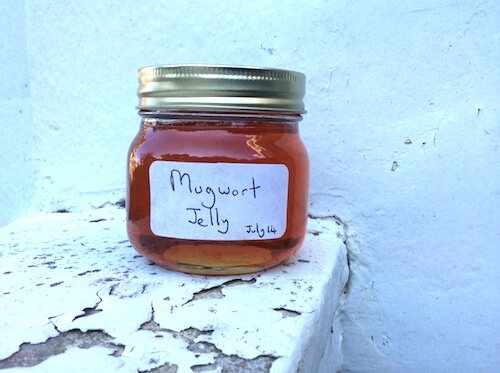 This mugwort jelly recipe will have you purring with delight. Perfect as an accompaniment with lamb, duck or other fatty meats.

Mugwort (Artemisia vulgaris) was one of the first plants that got my attention once I had crossed the threshold into “Depth Foraging”.

I was walking the “foul stinking beast” through a field near my house when all of a sudden out of the corner of my eye I spotted this silvery grey looking plant literally jumping up and down waving at me.

If it had bells on it they would have been ringing furiously. I ended up calling mugwort the singing, ringing plant, cos it makes one hell of a din if you do not pay attention to it when it wants to get to know you.

I know, I know most of you will think I am completely round the bend. “Plants talking to you, don’t be so bloody stupid Robin” I hear many of you say. But seriously folks, they do, you just need to shut up and pay attention to them, as they have an awful lot to teach us.

Let’s face it as humans we stopped listening to them and the rest of creation when we ceased wandering and became static agriculturalists. But for me, plants most definitely have wisdom to teach us, and often its not what you really want to hear.

Anyway, to get back to Mistress Mugwort, she is one mysterious dreamer. If she had human eyes they would be deep watery pools that you’d fall into half comatosed as she pulls you into her dreamtime. Go on, let yourself go, there really is nothing to be afraid of. And when you drift into her sober reverie, you’ll want her with you most of the time.

After all she does smell exquisite. There’s usually some piece of her strewn around my house, especially when the handkerchief gets pulled out. And children in bygone days would put sprigs of her under their pillow believing that she would help them remember their dreams. Who knows, give it a try for are we not all children at heart! Oh I do hope so.

So what on earth does this have to do with cooking? Nothing actually, I just thought I’d tell you my tale of how Lady M and I first met.

This mugwort recipe most definitely came from her, I just obeyed her command and created it, and am I glad I did.

In the ancient days Mugwort was used as a flavouring for fatty meats, so it will go rather well with lamb and duck etc, and for the veggies out there, try it with your next nut-roast I am certain you won’t be disappointed.