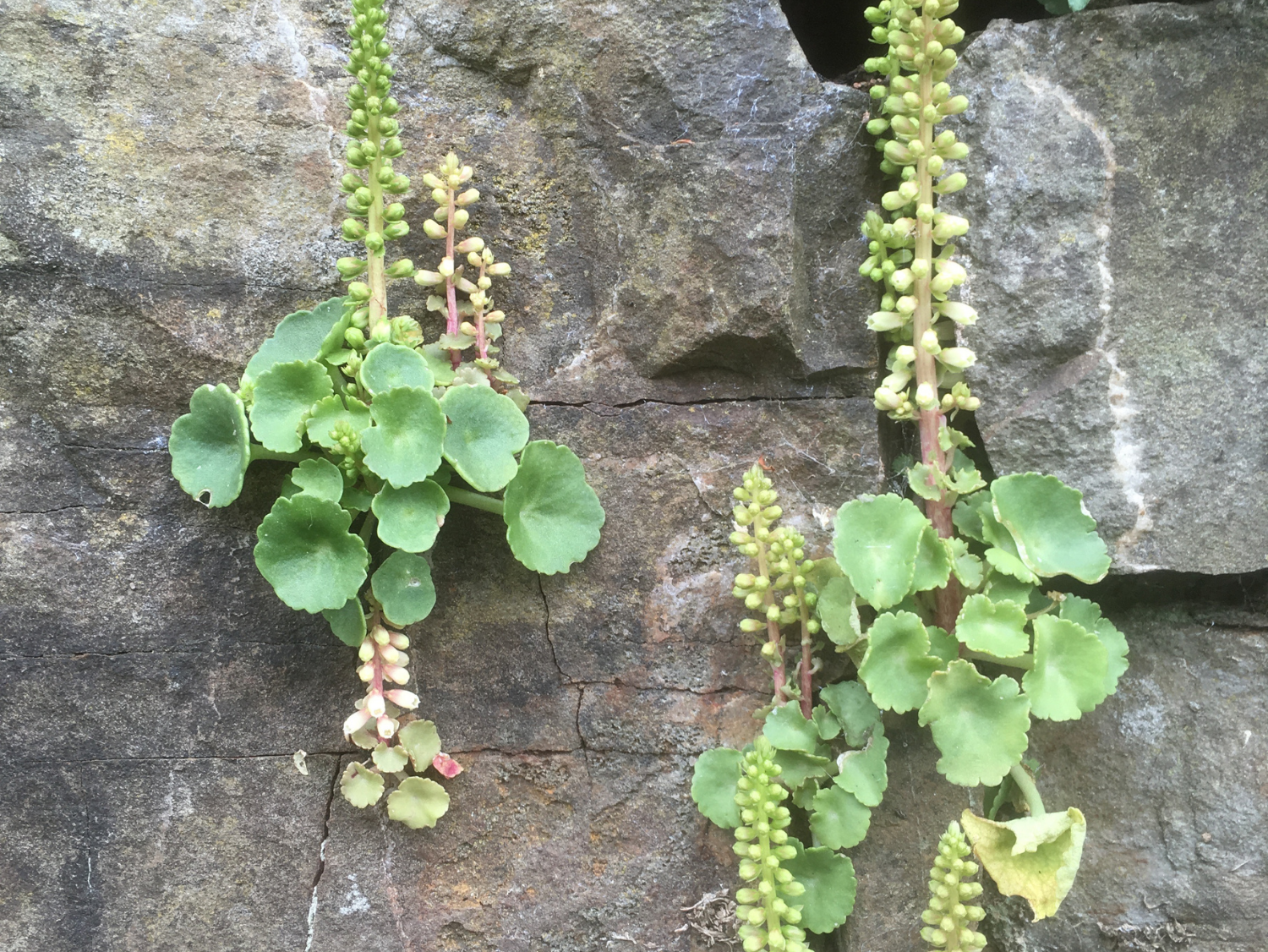 There is a tendency to overlook the navelwort in favour of the house-leek (Sempervivum tectorum) in folk medicine.

David Allen and Gabrielle Hatfield consider the medical uses of both plants – specifically the fleshy leaves – as:

…so broadly similar that they must surely have stood in for one another to no small extent.

Yet it is the navelwort that is undoubtedly a native plant of the British Isles, largely found in western parts, and the house-leek that is a “relic of long-forgotten introductions”.

A native of the British Isles, the fleshy leaves of this often forgotten plant make a tasty salad dish in winter and spring.

Whitish green bell-like flowers cluster around a spike with fleshy, rounded bright green leaves that dimple at the point the leaf joins the stalk. The fruit are small brownish seeds. The roots are round, smooth and grey-skinned with white flesh.

The plant prefers rocky habitats, stone and mud walls, and is also often found growing at the bottom of old trees.

The plant is in leaf all year round and flowering June to August with seeds ripening from July to September.

The succulent leaves make a juicy addition to salads or as a sandwich filling with chives or sorrel. They have a mild flavour when picked in winter or early spring and can be eaten raw. The leaves, seeds and stems of navelwort can also be candied.

The plant’s juice is thought to be diuretic and anti-inflammatory, and may be drunk as a tonic for the liver and spleen.

Traditionally, navelwort was used as a remedy for inflammations, cuts, chilblains, skin infections and for stones in the body such as kidney stones. The plant’s sap has also been used to relieve bee stings.

The plant’s use as a medicinal herb is scattered throughout history. In Irish folk medicine, it was put to use for a wide number of ailments, including jaundice, tuberculosis and skin complaints as well lumps and bumps, headaches, worms, fevers, liver complaints, and kidney and bladder stones.

The plant also yields a yellow and red dye.

Navelwort should not be used to treat earache (one of its folk remedies uses) if there is damage to the eardrum.

Its safety during pregnancy or when breastfeeding, and its interactions with other medicines and medical conditions, are not widely recorded. Use caution in these circumstances and seek medical advice.