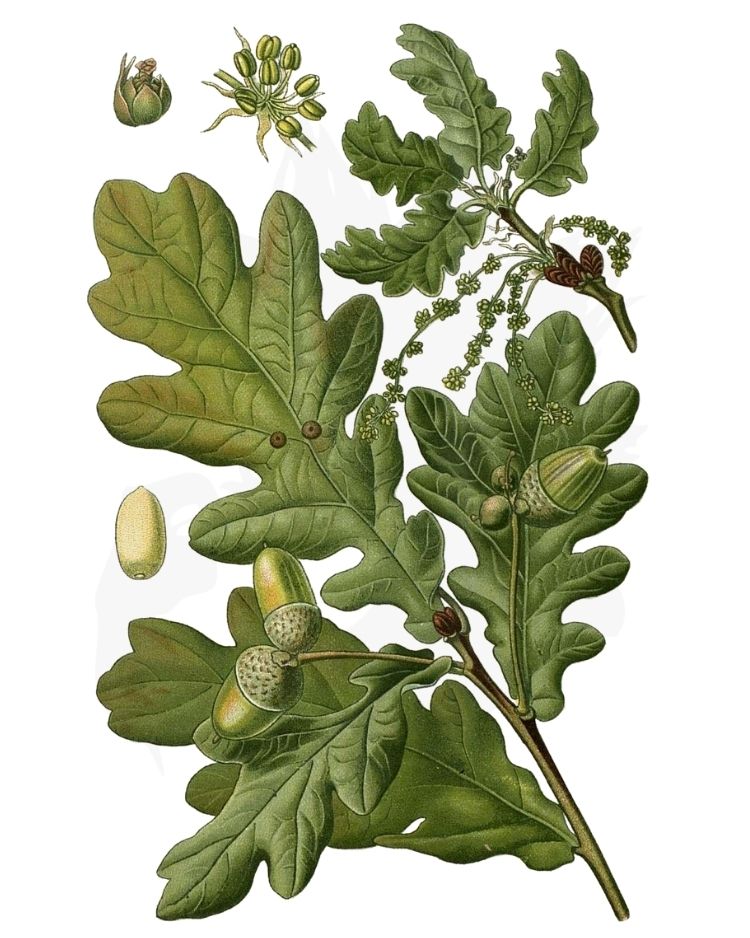 Oak is arguably Britain’s most beloved tree and can live up to 800 years. The fruit it bears – the acorn – has been popular as a source of food and medicine since ancient times.

All parts of the oak were once considered edible making this tree quite the forager’s feast!

Spring for leaves. Autumn for acorns.

Acorns have been consumed by humans since ancient times.

Classical authors write of the early inhabitants of Greece and southern Europe being fat on the fruits of the oak. They were the Balanophagi, or ‘eaters of acorns’.

In pastimes, acorns were collected and ground to meal for flour. The ‘acorn milk’, a byproduct of this process, was also drunk.

Acorns were gathered for snacking, roasting, boiling or drying to add to meals.

However, it is worth noting that caution is now given before eating acorns that have not been properly treated – leached of their plant tannins – and that eating the nuts raw is not recommended (see the section on ‘Cautions’).

Oak leaves were once used to make wine and even the trunk of the tree has provided an edible source of gum.

Acorns are nutrient-rich containing starches, oils, proteins, minerals (such as calcium, phosphorus and potassium) as well as several B vitamins (although these are water-soluble and often lost during the process of preparing the nut to eat), as well as plant sugars and tannins.

All parts of the oak – wood, bark, leaves, acorns and gallnuts – have traditionally been used in medicine since ancient times.

The tree was valued for its astringent properties most likely due to the high content of tannins.

It was used for wide-ranging ailments from mouth disease and skin complaints to rheumatism and digestive problems.

Surprisingly oak galls (a parasitic infection of the tree caused by a tiny wasp) had an even wider range of use from treating mouth diseases, infected eyes and ears, toothache, stomach disorders, dysentery, rashes, abscesses, skin ailments and burns, swollen spleens and regulating menses.

Other Uses of Oak

Oak is a well-known wood used for making furniture. However, some traditional uses of oak that we might find novel today have included making wooden bowls, milk pails, butter-firkins, baskets, fighting clubs, tool handles, coffins and even spinning wheels.

The plant tannins in oak may irritate the digestive lining if taken in excess.

Other sources suggest that oak is less edible than others, that the foliage can be poisonous and that the acorns should be properly treated (leached of the bitter tannins and then roasted) before consumption.

Consult a medical professional if taken for a specific condition.