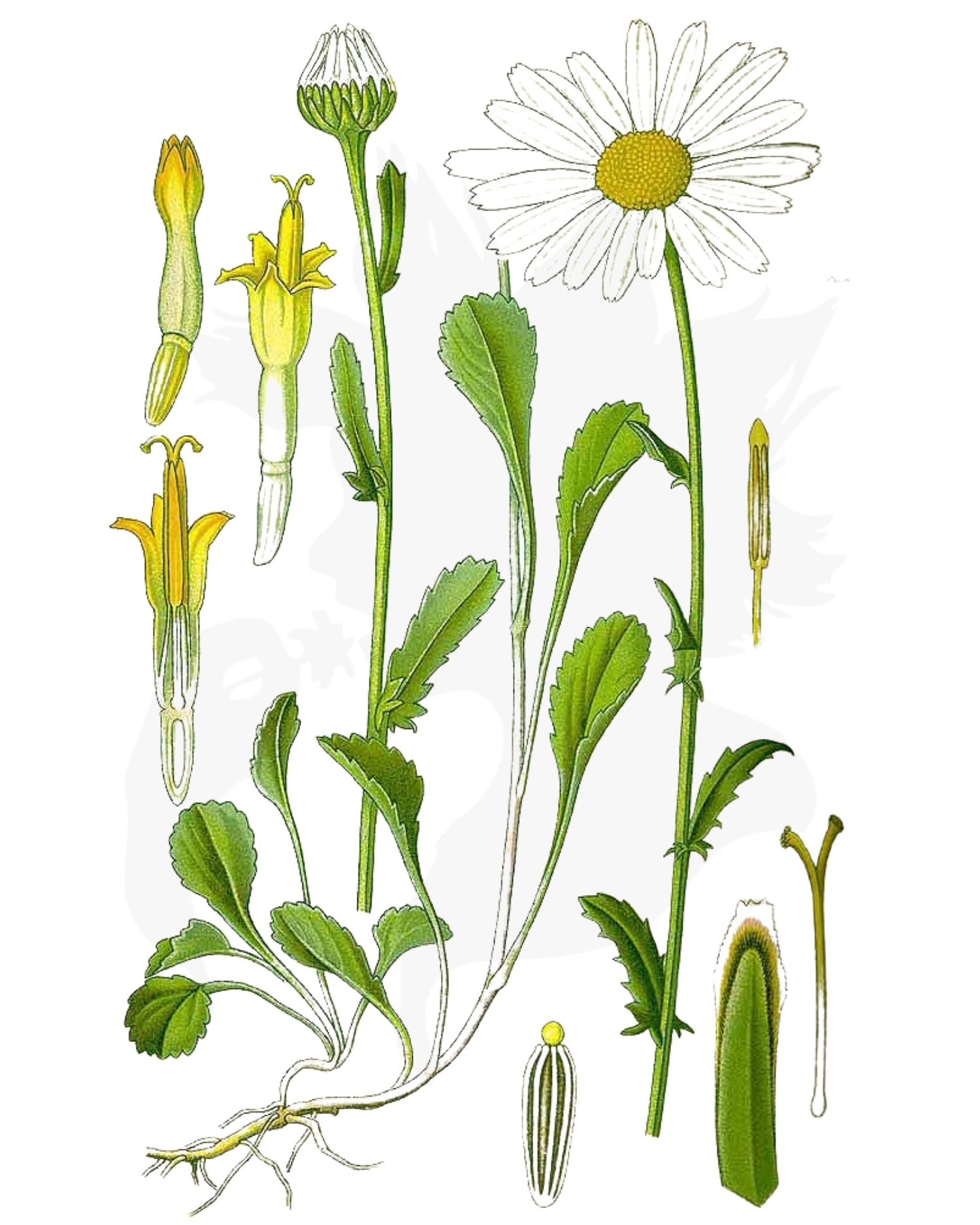 A familiar sight in fields, the Oxeye Daisy is found throughout Britain, Europe and Russian Asia. Where it was introduced to North America, the plant spread so rapidly that North Carolina adopted it as the state flower.

The name ‘daisy’, in general, comes from ‘day’s eye’ because the flower closes at night. Moon daisy and dog daisy are more authentic names for oxeye daisy, says Geoffrey Grigson, and that “oxeye daisy, began as a book name in the sixteenth century, because this plant appeared to be the bouthalmon of Dioscorides”.

The familiar sight of yellow-centred, white-petalled flowers are recognisable throughout the British Isles.

The leaves are dark green and spoon-shaped with rounded teeth at the edges.

The stem is hard, wiry, slightly furrowed and branched, with a creeping root structure.

Native to Europe and Asia, the plant is naturalised in North America.

Found widely throughout Britain and Europe, it prefers fields, roadsides, lawns and most grassy places, particularly where there are rich soils.

The plant makes a palatable salad vegetable. The petals, stem and leaves can be eaten raw in salads or sandwiches or added to soups and stews.

The plant can be bitter and it is recommended that the youngest specimens are picked and added sparingly to salads or other dishes like omelettes.

The young shoots and buds can be eaten lightly steamed for an aromatic flavour.

The flower heads can also be used for decorating salads and other dishes.

The leaves are thought to be high in vitamins A and C, betacarotene, riboflavin, niacin and potassium, but low in carbohydrates; the petals as also high in betacarotene and niacin.

Another name in England for the plant was bruise wort because the crushed leaves were applied to heal bruises.

Its abundance across the British Isles had led to its use for many ailments including coughs, chills, boils, jaundice, wounds, tuberculosis and sore eyes.

While oxeye daisy can be eaten as a hiker’s snack, it is advised not to eat too many of the yellow centre of the flower as it may cause indigestion. Consuming very large amounts of oxeye daisy can cause sickness.