Crawling at 5mph it took me ages to drive up the dusty, pot-holed road that led into the depths of wildness where foraging grand master Francois Couplan lives hidden in the depths of Provence, France.

If there is one person who I would dearly love to learn more about wild edible plants, then Francois is the man! I never in a gazillion years thought that I would find myself being invited for an evening meal, and spend time with one of my heroes… And trust me, I really don’t do heroes usually, but sometimes you hear about someone, and just know somewhere, sometime you need to meet them. 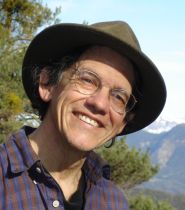 In this podcast interview, I sit as the sun goes down with a man who has been living with plants on a daily basis for over 50 years! Aside from the indigenous plant teachers I have met on my travels around the world, Francois has a knowledge that goes way beyond anyone living “in the West” that I know.

So it was a real pleasure to do this interview, even if I do sound excitable… that’s because… I was!

For a man who was there in Paris 68, its a fascinating record of someone’s life so completely dedicated to teaching and inspiring everyone about the importance of paying attention to plants, and the benefits that gives you. I hope you enjoy it.

Listen To This Episode

Francois is a pioneer in the study of edible wild plants of Europe. Over 40 years he has conducted an exhaustive survey documenting and recording their use as food. After living in the United States where he learned the edible uses from various Indian tribes, he then travelled throughout five continents in search of the traditional cultures that have enriched our planet. For the last 35 years he has been teaching in France, Switzerland, Belgium, Japan and Tonga. Francois works with top chefs to rediscover the forgotten flavours we once knew.

Eatweeds was created by Robin Harford to provide you with reliable, useful, and up-to-date information about foraging for edible and medicinal wild plants.

You can support his work through donations and sharing info from the site with others.

Scroll back to top