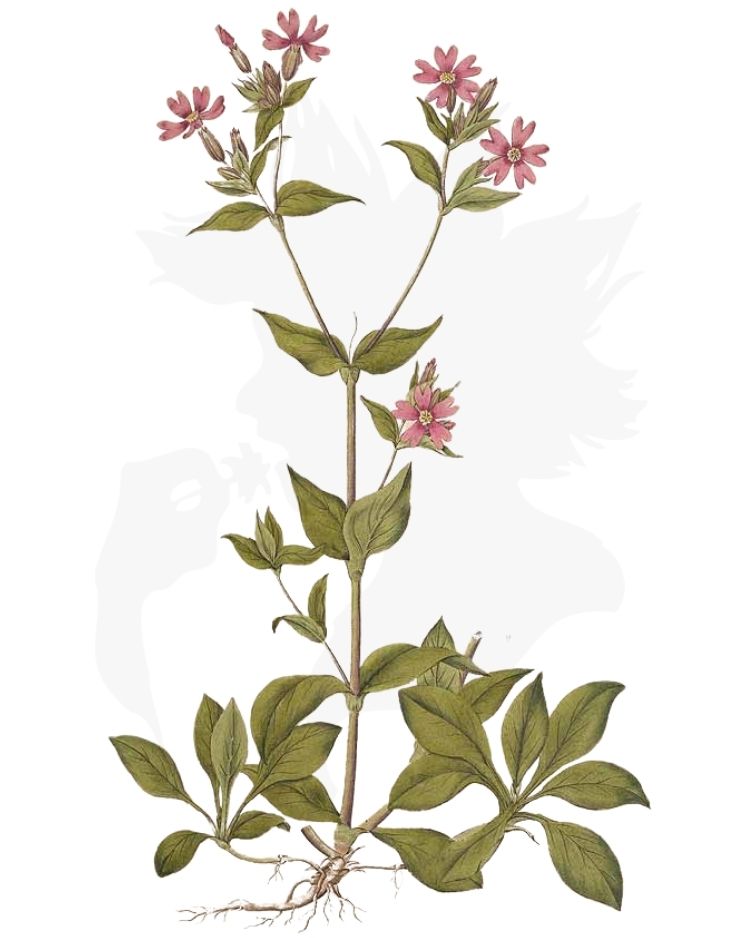 A recognisable flower of the hedgerows, the flowers of Red Campion (Silene dioica) were said to resemble buttons.

The Latin name Silene comes from the merry, drunken Greek god Silenus, although in folklore the plant was considered anything but merry.

Red Campion had a dubious reputation in some parts of Britain where it was believed that picking the flower would bring bad luck.

There was a belief held among children that they would be killed by lightning if they picked the flowers.

In Wales, the plant was known as snakebite and picking it was thought to lead to snake bites, or caused snakes to come into the house.

Red Campion, like bluebells, had associations with fairies, or goblins, and their mischief.

The varied species of campion display small flowers in red, pink, and white with a variety of attractive leaves and stems. Red Campion has small button-like red flowers with short round green leaves and long erect stems.

Perennial. Grows from Spring to Summer across Britain, Europe and Asia.

Red campion is found in hedgerows and roadsides in Britain, Europe and Asia.

Red Campion leaves are an ingredient of pistic, a traditional spring dish eaten in northern Italy.

Red Campion wine was made in 20th-century Britain by boiling oranges, lemons, red campion flowers and leaves with barley and sugar.

The young shoots can be blanched to reduce their bitterness and made into a puree similar to spinach.

The leaves of the plant can be added to a variety of dishes, including salads, soups, stews, sauces, herbal cheeses and even as a substitute for asparagus.

Campions (of any species) were once used to treat internal bleeding, kidney disease, sores and ulcers, and stings.

Healers also used it to treat warts and corns.

In parts of Spain and Italy, the plant was sometimes used for digestive disorders.

There is little information about the side effects of using Silene species during pregnancy or breastfeeding.