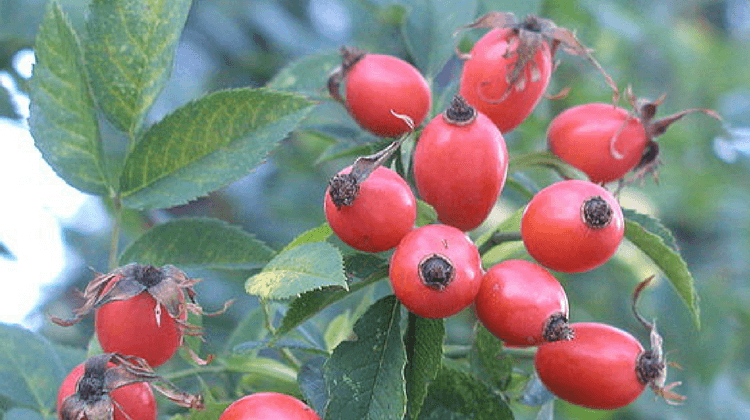 The rose family (Rosaceae) is a large clan of dozens of species and thousands of hybrids. It is one of the most famous flowers in the world prized for its beauty and fragrance.

The Story of Rosehip

Rose petals are made into scented sachets, distilled into rosewater, and sold as expensive oils and perfumes. But the rose is not just a pretty face – it is a wild edible that can be eaten from root to tip.

The flowers flavour cakes, jellies, puddings, syrups and wine. The fruits, or rosehips, are added to salads, sauces, soups and teas. It is a medicinal plant too.

Around the world, the gentle healing properties of rose make a valuable addition to the natural apothecary cabinet.

Britain’s native wild roses have been open to discussion by botanists for years, because of the wide variations between different species and hybrids.

It is the dog rose (Rosa canina), a scrambling, prickly climber with delicate, whitish-pink flowers, who is the topic of this piece but other species will often take centre stage.

Like all wild roses, the dog rose must constantly compete with its cultivated cousins for recognition. Its subtle-scented flowers appear in early summer in shades of white to pink.

Gabrielle Hatfield says dog rose is one of the longest living plants: “A bush growing in Hildesheim in Germany was said to have been planted there in AD 850 by Emperor Charlemagne’s son”.

So we don’t forget the beauty of a wild rose forever in the shadow of its garden relatives, Hatfield writes:

“Viewed from a distance, a flowering English rosebush looks as though a flock of pink butterflies has perched on it…you see a jewel-like beauty, with a golden crown of stamens protected by delicate petals”.

The deep orange-red fruit – the rosehip – is traditionally the most-used part of the plant.

Mrs Grieve wrote in her A Modern Herbal:

“Rosehips were long official in the British Pharmacopoeia for refrigerant and astringent properties, but are now discarded and only used in medicine to prepare the confection of hips used in conjunction with other drugs.”

The dog rose (Rosa canina) was named for the belief that it cured the bite of rabid dogs. Roman physician Pliny the Elder in the 1st century told the story of a woman who received a message in a dream.

The woman was asked to send her son, a soldier, a decoction of wild (dog) rose root. The decoction, known to the Greeks as Cynorrhodon, cured a mad dog’s bite.

Other sources imply that ‘dog’ is a corruption of ‘dagger’ referring to the plant’s jagged-edged leaves.

One source suggests the ‘dog’ in dog rose was meant in a derogatory sense, “implying that Dog Rose was of ‘little worth’ in the garden”.

Both alternatives contradict the Greek story of the flower’s origins. Rest assured, dog rose is worthy of a place in our history and culture. Remains of its fruits are dated back to prehistoric settlements and prove its value to early societies.

When Are Rose Hips Ripe And Ready To Pick And Gather?

It depends on where in the country you live in because sometimes the North can be a month behind the South, and vice-versa. It’s strange times with climate change and that affects the fruiting times.

However usually in the South West, I am gathering rosehips from the end of September right through to December, and beyond.

Is It True I Need To Gather Rosehips After The First Frosts?

The reason this advice is often seen in the older wild food books is that fruit flesh becomes soft after a frost. The frost breaks down the cell walls of the fruit, thereby giving you more liquid once the fruit is cooked.

When I was a boy in the 1970s, I remember the Autumns being very cold and frosty.

These days I rarely see a frost before Christmas, and usually not until February or March, by which time the rosehip fruits might well have started to rot.

The way to mimic frost is to pick your rosehips when they are nice and red and fat, even if they appear hard, then take them home and put them in your freezer for 24 hours, defrost and use in your rosehip recipes.

Believe me when I say that you must always freeze your rosehips, as this will allow for maximum flavour when crafting your rosehip recipes.

Are All Rosehips Edible & Safe? Are Any Rosehips Poisonous?

Yes, all rosehips are edible. The ‘Hip’ is actually the fruit of the rose.

This is the traditional rose that was used in bygone days for all those old-fashioned recipes you might come across in your decrepitly ancient cookbooks.

Another is the Japanese Rose (Rosa rugosa), an invasive that can be found in most cities.

It has ‘Hips’ the size of a large conker! Although they have big ‘Hips’, the flavour is quite watery, so is not that suited to making things like rosehip syrup, but is excellent in jams, jellies, vinegar etc.

Are All Rosehip Seeds Edible?

What Can Rosehips Be Used For?

One of the most traditional rosehip recipes is rosehip syrup. In modern cooking creative chefs and cooks have been conjuring up a wide variety of ways to work with rosehip.

At the end of the day, you are only limited by your imagination.

Here are a few rose hip recipes of my own:

This is a common question and one that can easily be answered. Vitamin C is water soluble which means the vitamin C leeches into the water when cooking the rosehip fruit.

As most rosehip recipes require this water you are not losing any vitamin C. Yes some degradation of the vitamin C occurs due to the heat. How much is dependent on temperature and length of cooking time.

During the 2nd World War, the British Medical Journal did a thorough study. I wrote an article years back about this. You’ll find it here.

How To Dry And Preserve Rosehips?

The easiest way to store rosehips long term is by drying them.

The problem comes when you try and remove the annoying hairs that fill the inside of the rosehip. Like a fluffy jacket protecting the seeds.

Eating the rosehip hairs can be highly irritating to your digestive tract, hence the need to make sure you have removed them completely before using in any of your rosehip recipes.

A few years ago I created a photo tutorial showing you how to do this: