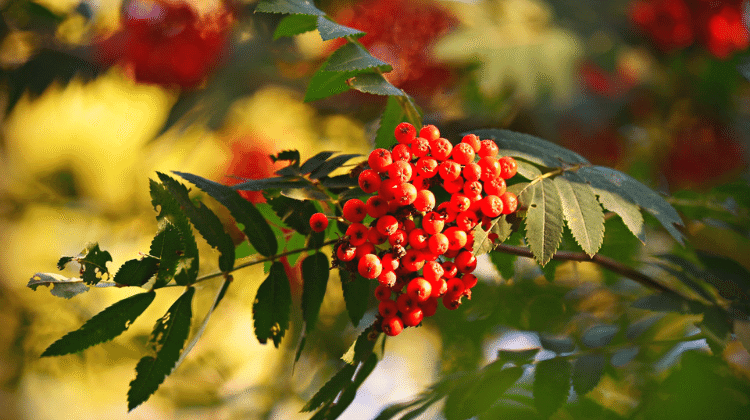 Rowan or Mountain Ash is an ancient tree used since ancient times.

The berries provide a variety of wild edible delights and offer a range of uses in medicine.

The bark of this small shrubby tree is smooth, shiny and greyish coloured.

The stem and branches are slender with pinnate leaves that are dark green on the upper side and bluish green on the underside with toothed margins.

The tree yields scented white-petalled flowers in umbrella-like clusters. The berry-like fruit is scarlet, turning from green to yellow to orange-red as they mature.

It prefers rocky places, glens and mountain riversides; also grown as an ornamental tree of parks and gardens.

However, the raw berries have a bitter taste unless you know how to pick and prepare them.

The bitter, astringent taste is said to be improved after frost, which helps make the fruit sweeter.2

In Estonia, between the 18th–21st centuries, almost all parts of the rowan tree have been used as a wild edible, including the bark, twigs, buds, flowers, leaves, sap and fruit.3

In fact, it was once used to treat scurvy and we now know that the tree’s berries contain high amounts of vitamin C.1

Recipes for Rowan or Mountain Ash

Since ancient times, the berries have been prescribed for stomach disorders or for bleeding.1

The leaves were also used to make remedies for sore eyes, rheumatism, asthma and colds.5, 6

The berries and the bark are astringent which may support these uses of the tree.

The wood is hard and elastic and has had many commercial uses in woodcraft from making baskets and cartwheels to kitchen utensils and crates.

The berries may irritate the stomach if taken in excess, while other sources warn that the seeds may be toxic and cause poisoning.1

There is little information about the safety of the tree during pregnancy or when breastfeeding, and so rowan is best avoided at these times.