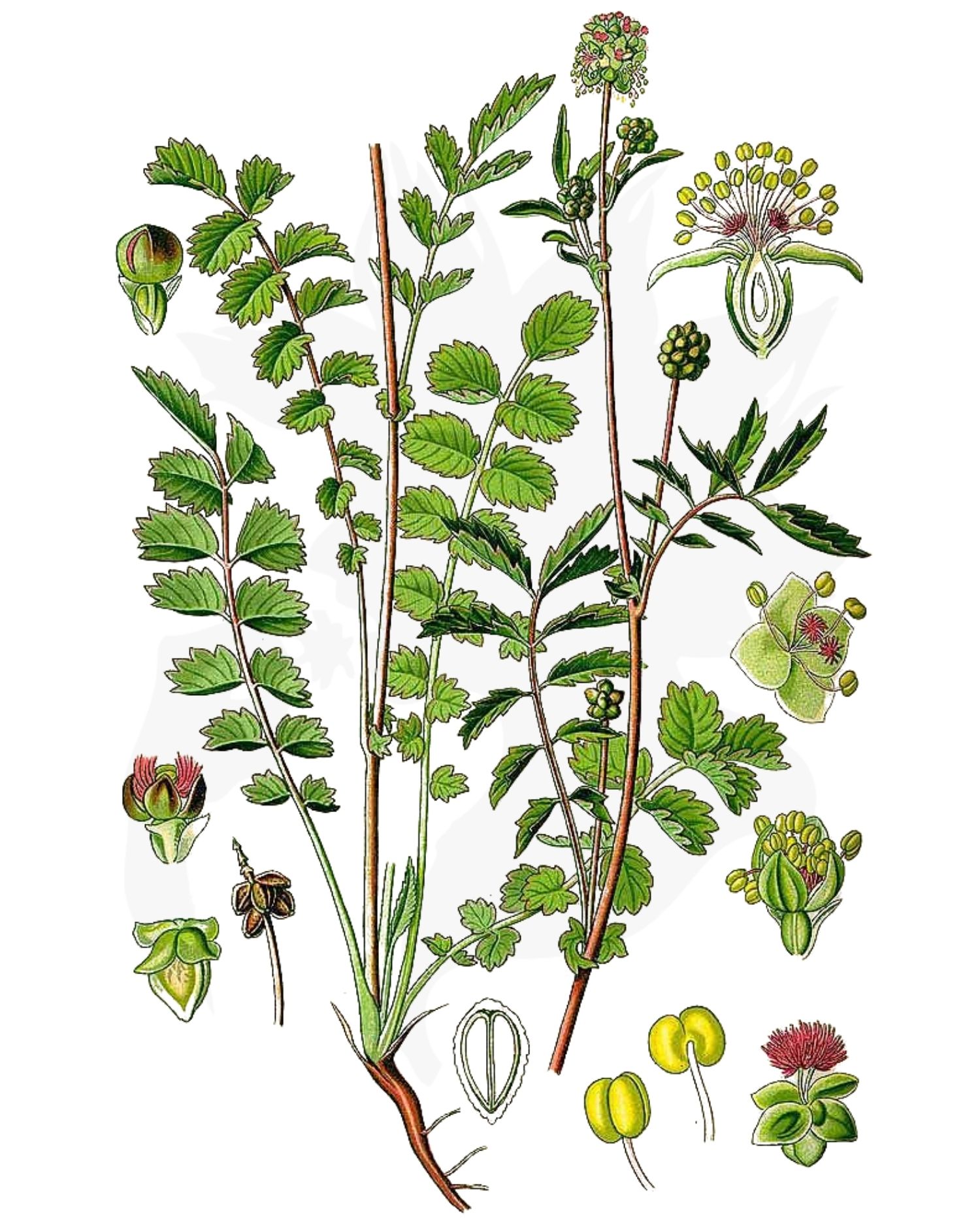 Salad Burnet is one of the few wild species which supplies edible greenery for most of the year.

During the winter and spring months, you will frequently find new growth sprouting, and this may be used in salads, while you can add more mature leaves to soups and pottages.

The leaves have a bitter flavour reminiscent of cucumber skin.

Salad Burnet was grown and used as a foodstuff for many centuries. In addition, it has been grown in Britain as a fodder crop for cattle because it grows year-round in favourable conditions.

It also responds to being cut back by sprouting new leaves (indeed, this trick of cutting back the foliage as the plant started to produce its flower buds was the gardener’s method of keeping leaf production going).

The plant grows to between 30-60 cm in height. Leaves: Ovate, serrated leaflets between 0.5-2 cm. Flowers green to dull purplish, 7-12mm.

It likes poor, dry soil and grows well on dry chalky grassland. Common in Britain but rare in Ireland.

Best when the plant is starting to flower. If you regularly harvest a community, the leaves will grow throughout the year, providing an excellent salad crop even in Autumn and Winter.

Leaves are eaten in salad and added to soups and pottages. Gerard tells us that: ‘it is thought to make the heart merry and glad.’

Rutty, in 1772, mentions that the leaves were ‘put green into Wine as a cordial, and to give it a grateful taste and smell like Melon; also fresh infused, they mend stale drink’.

You can add the fresh leaves to a claret cup. A claret cup is an iced drink made from claret wine and carbonated water, often with lemon juice, brandy (or other spirits) and included fruits and sugar. They were the precursor to Pimms.

If you dry the leaves slowly, they retain their aroma and make a delightful tea.

Rembert Dodoens (1517-1585) recommended it as a wound healer. Gerard (1545–1612) tells us the juice can be drunk to heal internal bleeding or a decoction of powdered dry leaves in water. For external wounds, you would need to bruise the leaves before applying.

The plant, when eaten by cows, increases its milk yield.

I can find nothing specific to Sanguisorba minor, however, for Sanguisorba officinalis (Greater Burnet), it is recommended that the plant be avoided if you take quinolone antibiotics.

Mackay, J. T. (1836) Flora hibernica: comprising the flowering plants, ferns, characeæ, musci, hepaticæ, lichenes and algæ of ireland, arranged according to the natural system with a synopsis of the genera according to the linnæan system. W. Curray jun.

Rutty, J. (1772) An essay towards a natural history of the county of dublin: accomodated to the noble designs of the dublin society … W. Sleater.