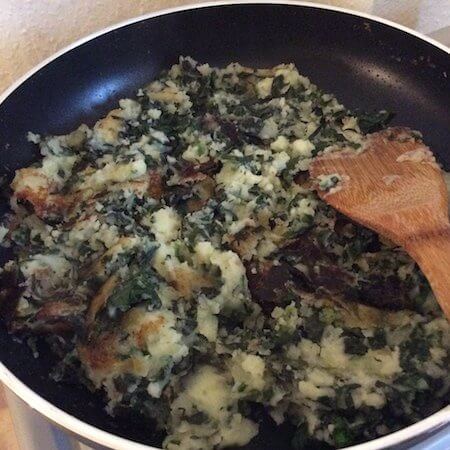 When I was a youngling aged 9, I distinctly remember being served bubble and squeak at school out of plastic buckets by ‘diner ladies’, who where nothing more than tyrannical old bisoms in disguise.

Needless to say such experiences traumatised me to the point that I never wanted to eat cabbage (if it could even have been called that by the time they’d boiled every last vestige of vitamin content out of it) ever again. And to combine potato and cabbage was enough to make me wretch just thinking about it.

However during my 30’s I was rescued from these horrific memories by a friend who this time served up bubble n squeak properly. I decided that such a dish was actually worthy of creating, and plonking down in front of friends, and so began a new found love affair.

Recently I decided to try a variation of it using sea beet, and much to the ums-and-ahs of a willing friend realised it was worthy of sharing with you.

Fortunately buckets and diner ladies are no longer part of my reality. No need to attempt at being a Michelin star chef, nope today you’re going to try a simple dish, one that is humble, wholesome and highly nutritious. Food fit for noble peasants everywhere. To the stove dear friends to the stove, and onwards.