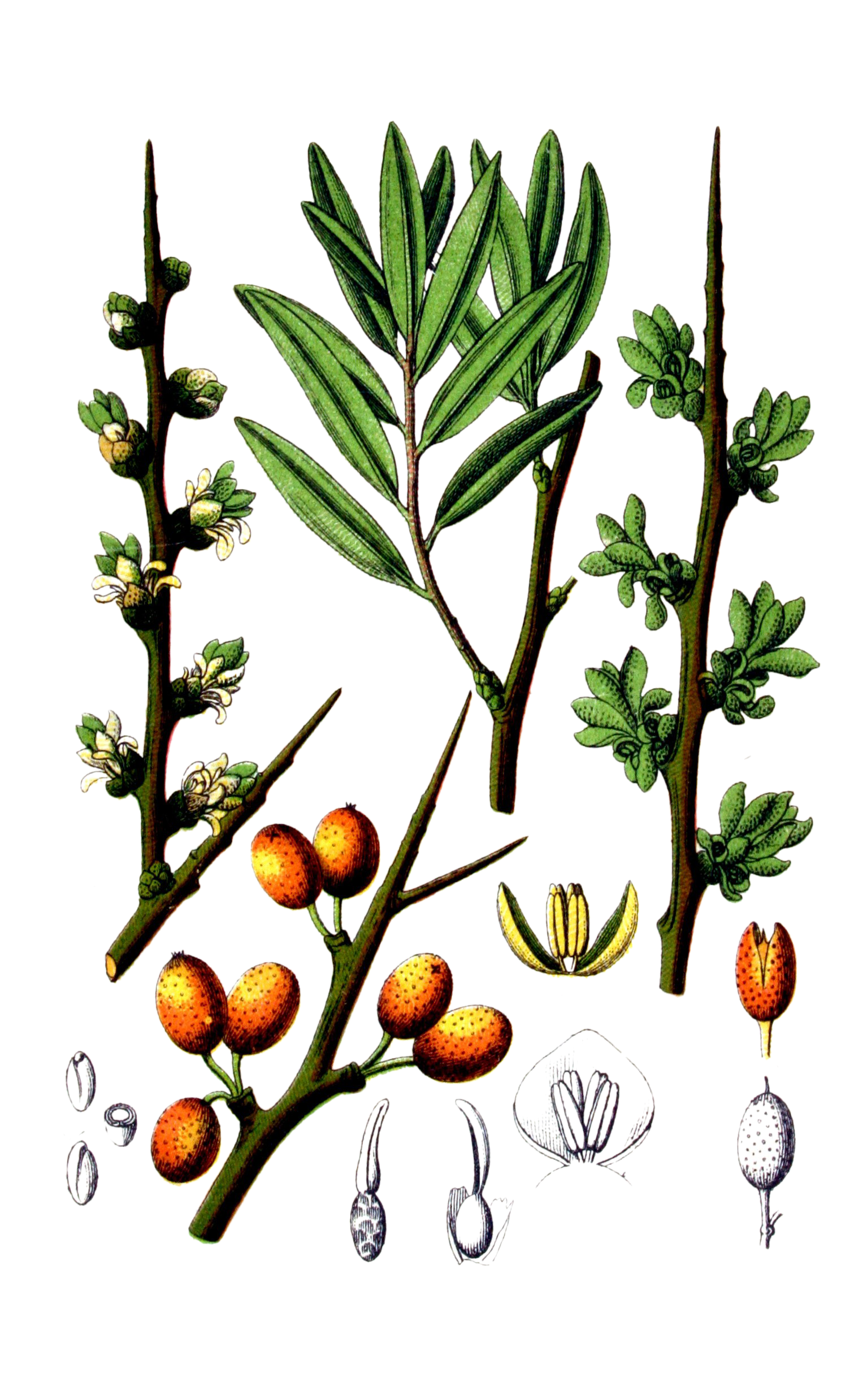 Sea buckthorn is an ancient crop with modern virtues, say many researchers of ethnobotany. Its Latin name Hippophae is from the Greek ‘hippo’, meaning ‘horse’, and ‘phaos’, meaning ‘shine’.

The plant was used in ancient Greece as animal feed, particularly for horses because it was believed to make their coat shine.

Sea buckthorn has been used for centuries in food and medicine and has attracted scientific attention in recent years for its nutritional qualities and its potential medical applications. It has gained popularity worldwide.

A stocky shrub growing up to 1.9 m tall, with thorny branches densely packed with juicy, orange fruit. The leaves and narrow, lance-shaped and covered on both sides with silvery scales, and the small flowers are green.

Sea buckthorn is particularly common in areas of sand hills; in Britain, the plant has been introduced to many places around the coasts of south and south-west England, Wales, Scotland, and also in the northeast and south-east of Ireland.

This Mediterranean native is found in Asia Minor, Syria and the Canary Islands, as well as being naturalised in the British Isles.

Largely the fruit, although the leaves are sometimes picked and dried to make tea.

The edible fruit can be eaten raw. They are aromatic, but acidic, or sour-tasting, some say like lemons.

The fruit is made into jelly, marmalade, syrups and sauces, or added to ice creams, sorbets, compotes and fruit quark. The acidic juice can be added to salad dressings or meat and fish dishes.

Sea buckthorn berries are one of the richest sources of vitamin C (780 mg/100 g), according to several sources. a teaspoonful would cover a daily requirement of vitamin C for an adult. Both the berries and seed oil contain 190 and 106 bioactive substances respectively. Indeed, the berries are said to have a unique cocktail of components usually only found separately in plants.”

Since ancient times, it has been used for “relieving cough, aiding digestion, invigorating blood circulation, and alleviating pain”.

The cardioprotective effects of the sea buckthorn, which have only recently come to the attention of modern medicine, have been known in Tibetan medicine for thousands of years.

The plant was also used to treat stomach ache in Tibet, as well as disorders of the lung, colds, coughs, fever, inflammation, abscesses, toxicity, tumours, constipation, and gynaecological disorders. Again, many of these uses are now the subject of scientific research.

The high vitamin C content in sea buckthorn as well as its other nutritive and restorative components makes it ideal for use in cosmetics for treating various skin disorders and as an anti-ageing cosmetic.

The berries may be purgative and should not be eaten in excess. Avoid during pregnancy and when breastfeeding.

Humans are not the only species that benefit from sea buckthorn, which is why it is important to learn to forage sustainably. The following critters also need the plant: