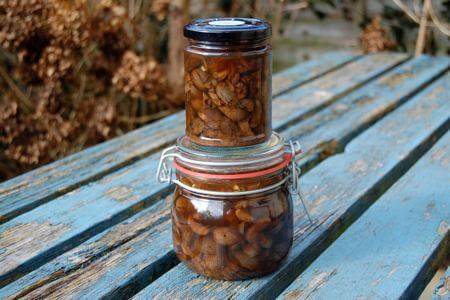 Acorn recipes tend to be rather bland and boring. Most folks grind them into flour and add that to bread or as a thickener for stews and casseroles. For this acorn recipe, I decided to do something a little different. Why not spice them up and pickle them.

So there I was starring at my freshly processed batch of acorns and wondering what on earth I could do with them.

Then a flash of Pickled Walnuts came to mind. “Ah-ha,” I thought. These crafty acorns had just revealed how they wanted to be preserved.

For this acorn recipe, I used English Oak (Quercus robur), however, I think that acorns from Holm Oak (Quercus ilex) might go down rather well too because they contain less tannin and therefore require less processing, which would result in a firmer pickled acorn.