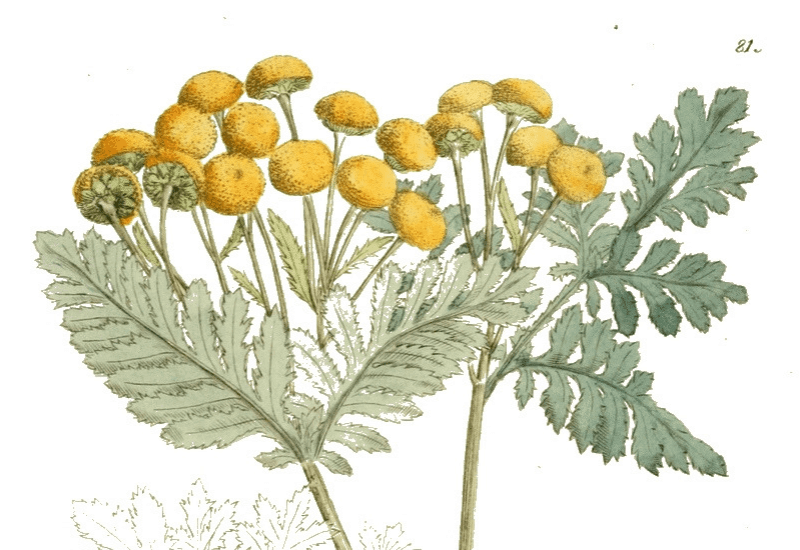 Tansy (Tanacetum vulgare) has always intrigued me. Her smell is heady and intoxicating, which is hardly surprising considering that she contains thujone, a psychotropic, although in very small quantities in Tansy.

Thujone can be found in Wormwood (Artemisia absinthium) which is found in high concentrations in absinthe, a drink that Van Gogh was partial too and made him paint vivid pictures before finally chopping off his ear in a spate of madness. His death being attributed to his absinthe addiction.

However Tansy has been used for centuries as a flavouring for food and drink, having a somewhat spicy, bitter, warming flavour and one that I personally find quite pleasant.

Used in small quantities in old recipes of Britain, it is a well documented flavouring being used before the spice trade took hold and many of our wild spices got forgotten.

Below you will find my own version for Tansy Pancakes with the original recipe published in The New Art of Cooking by Richard Briggs in 1788.

In fact there are so many Tansy recipes going back hundreds of years, that shows this plant to have been a familiar favourite in kitchens of times gone by.

I hope you enjoy, and although the picture above doesn’t really show it, these Tansy pancakes turn out a wonderful green, something that will delight your guests at your next dinner party!

Just don’t eat hundreds of them, or you may end up like Van Gogh or worse…

Tansy oil is highly toxic and can cause death from as little as 10 drops if consumed internally. Never use it in cooking or for internal consumption!

Tansy produces allergenic sesquiterpene lactones which have been shown to cause contact dermatitis. It must also be avoided if you suffer from any kind of allergy, and specifically if you suffer from allergies to the Compositae family of plants, of which Tansy belongs.

The plant may also affect blood-sugar concentrations and may interfere with hypoglycaemic therapy. Tansy must not be consumed if you are pregnant or breast-feeding.