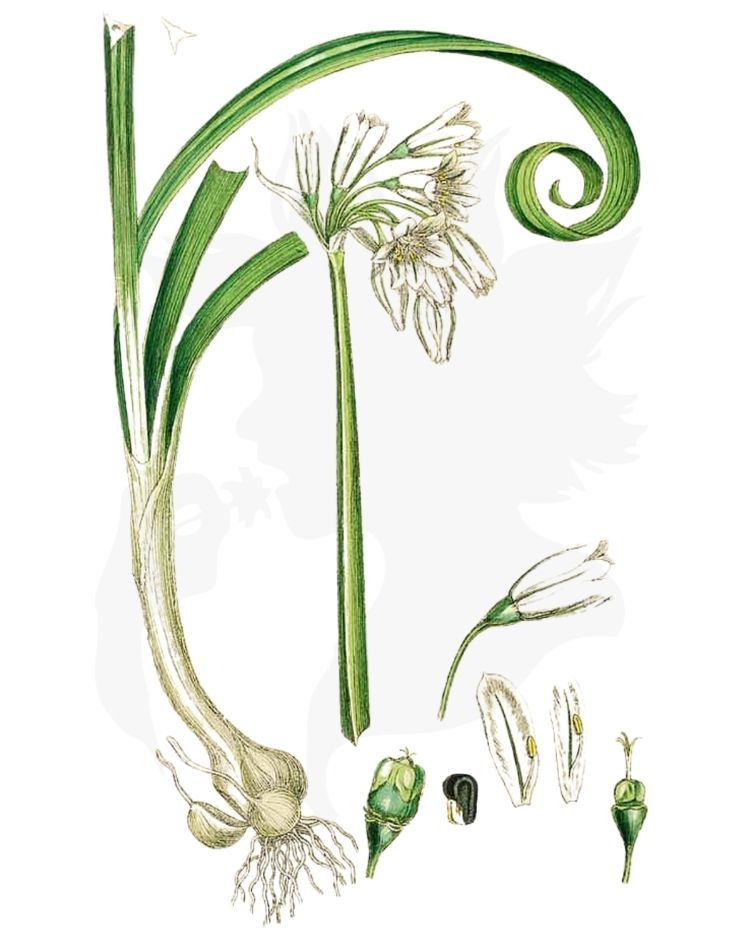 Under Schedule 9 of the Wildlife and Countryside Act (1985 and amendments) it is an offence to deliberately or accidentally introduce this plant into the wild. Make certain when harvesting, to use suitable containers that do not allow any part of the plant to accidentally fall out when transporting back home. And dispose of any unused material safely (not your own compost bin, or green bin, instead use black bin). – Mark Duffell from Arvensis Ecology

This grassy plant yields a garlicky smell when crushed. Its flower stem when cross-sectioned appears triangular leading to the name Three-cornered Leek.

While it has fallen short as a medicinal herb in traditional remedies, it makes an interesting culinary ingredient.

The flower stem when cross-sectioned appears triangular – a characteristic that has led to the common name ‘three cornered’.

The plant reaches up to 45 cm in height with drooping white bells marked with green and long, triangular leaves with a ridge that resembles the keel of a ship.

Each plant has around three to four leaves that do not surround the flower stalk.

It grows along walls, grass verges, banks, bracken, and churchyards. It is attractive to the landscape but it may be considered an invasive plant.

Chef Paul Wedgwood includes the plant in his Garlic Mustard vichyssoise, served at Wedgwood The Restaurant in Edinburgh, Scotland, which gives you some idea of the extraordinary flavour of this wild edible.

The young, tender leaves can be added to salads in place of spring onion for their milder oniony flavour and the flowers added as a garnish. The leaves can also be fried, boiled and served with cream sauce, or used in leek soup.

There is little data available on the nutrient value of Three-cornered Leek, see medicinal uses below.

While Alliums like garlic are often added to the diet for their beneficial effect on blood cholesterol and for use as a digestive tonic, Three-cornered Leek is rarely mentioned in past or present herbalism.

The plant’s juice is said to repel moles and insects.