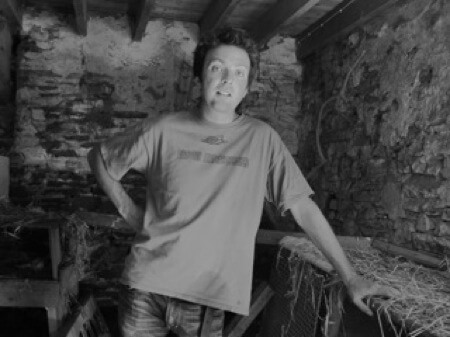 Tom Hodgkinson is editor of The Idler and best selling author of How to Be Idle & How to Be Free. Last weekend I managed to grab him for a quick interview to talk about the idler lifestyle and the benefits of wild food foraging. Watch the video or if you like to read, then you’ll find the transcript below…

Tom: Before I met you Robin, I had only really foraged for elderflowers, blackberries and elderberries, and the odd mushroom. Most of which we got from the woefully incomplete Hugh Fernley Whittingstall’s River Cottage Cookbook. Which is good to sort of get you going, but is lacking in some accuracy and detail.

But even in my foraging early years, which was the day before yesterday, it is pretty obvious that Nature is doing a lot of the work for you. Oh and something else we have around here is whortleberries which are like a little bilberry, and they grow on the windy coast of Exmoor near where we live.

It’s just a question of making a countryside walk into something productive, and using what Nature has already done for you.

I know as a now hard working vegetable gardener actually what a lot work it is to grow the vegetables that you want, at the time that you want and in the place that you want. And the results are fantastic, but clearly from a strictly Idler point of view, the much more sensible thing would be to go foraging for what is already there under your nose. And it is quite amazing to me that the elderflowers and the blackberries are completely free and the process of harvesting them is so healing and enjoyable in itself.

Robin: As a novice forager how confident do you feel to actually engage the countryside from a foraging perspective? Do you feel safe doing that? Do you feel that it’s just one of those things that’s too complicated to ever get your head around, or do you think it’s something that could really be incorporated into your lifestyle?

Tom: Yes it can definitely be incorporated into my lifestyle without any doubt.

Clearly like any other area ‘husbandry’ (I suppose) you could study the subject for years and years. But we’ve already made a start. I mean I didn’t realise that we had chickweed and fat hen growing here. I’d heard them mentioned in other books but I had never bothered to try and identify them. And I’d actually be quite nervous to identify them just from the book. I wouldn’t be quite certain if it was the right thing. It’s not always easy to tell from a book. Perhaps you need to check three books to be completely sure.

But obviously the best way of learning something is by your own direct experience and someone teaching you and showing you. So I’m just thinking about how to remember in future, because if you don’t do something quite regularly then you tend to start to forget it.

We knew that we had the camomile thing, the pineapple mayweed outside, but I didn’t really know that you could eat it and put it into salads. We didn’t know, as I said, that we have this huge amount of chickweed and fat hen growing everywhere. We knew that dandelion leaves could be used in salads a bit, but I have always found them a bit bitter. There’s actually much more delicious stuff out there. And we’re surrounded by food. So it’s really exciting for that reason, for the useful reason that it’s free food.

It’s rather like when we first went to catch rabbits with our ferrets, and sent them down the rabbit holes. I was actually engaging with the landscape in a way that I hadn’t done before, when we just walked through it and over it. And you’re sort of separated from it because you look at it as a photograph ie. a view, ie. you’re looking at something that’s out there, rather than being in it.

And so when we went out with the ferrets I suddenly felt much more deeply connected to the landscape in a way that’s quite hard to describe. And that was the experience of going out today with you Robin, you suddenly feel connected to it. You actually sort of feel your eyes are open and you’re looking at it for the first time, actually seeing what’s there, seeing what’s actually under your nose. Which is actually an extremely difficult thing to do because you’re not generally encouraged to do that.

Robin: The kind of common perception of a lot of wild foods is that they’re just survival food, they’re kind of last resort. From the flavours that you’ve tasted over the last two days, would you say that’s true, that it’s just ‘grunt food’?

Tom: I remember I was coming down on the train back home from London one day, and I was reading Richard Mabey’s Food For Free. And I bumped into a friend on the train who also lives down here, and he looked through it and said ‘that it was a pretty meagre meal’. I mean it’s not going to be your entire meal is it? You’re going to have it in risotto, and it’s going be a salad. I haven’t seen big thick, juicy things out there, really. So it’s an addition, but the point is I think, is it feels like a medicine more than the food that you can get in the shops, and probably more than the food that I’m cultivating as well. Because it’s really sort of meant to be where it is it’s grown up naturally, so it’s in exactly the right place at the right time. I can see that the range of flavours is massive. The chickweed and fat hen were much tastier than I thought, and so was the pineapple thing.

Robin: And what about the estuary greens that I brought up?

Tom: They were absolutely fantastic! I mean really, really good. Rather like when we made our own jam from the sloes and blackberries in the hedgerow and the hips and the haws. Just one taste of it and you can feel the energy sort of filling you. So just like the cultivated plant, those things have been sitting there soaking up the sun, and the rain all year round, and that energy is now being given to you in the form of a plant. Yeah, it was delicious guys.