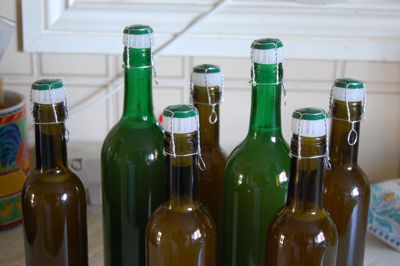 The following Nettle Beer recipe was created by Maude Grieve back in the 1930’s. Maude was a Fellow of the Royal Horticultural Society, as well as an extremely respected herbalist with an encyclopaedic knowledge of medicinal plants.

During the First World War she wrote and published pamphlets on the cultivation and uses of herbal medicines. It is these pamphlets that went to make up her Magnum Opus “A Modern Herbal”. It is from her book that this Nettle Beer recipe comes from.

Don’t expect anything alcoholic or ‘sweet’, as this Nettle Beer recipe produces a drink that is dry and crisp, yet extremely refreshing. Most of my friends that I tried it on liked it, and found it an unusual drink. Some friends simply didn’t get on with it at all.

Personally, I liked it, and have used it in a Road Kill Venison casserole that was cooked up over an open fire along with numerous wild edible plants. A good time was had by all.

So if you are looking for a low-alcoholic refreshing Springtime beverage, then this Nettle Beer recipe might just be the ticket. Or if you leave it mature, then you can drink over the Summer.

Eatweeds was created by Robin Harford to provide you with reliable, useful, and up-to-date information about foraging for edible and medicinal wild plants.

You can support his work through donations and sharing info from the site with others.

Scroll back to top