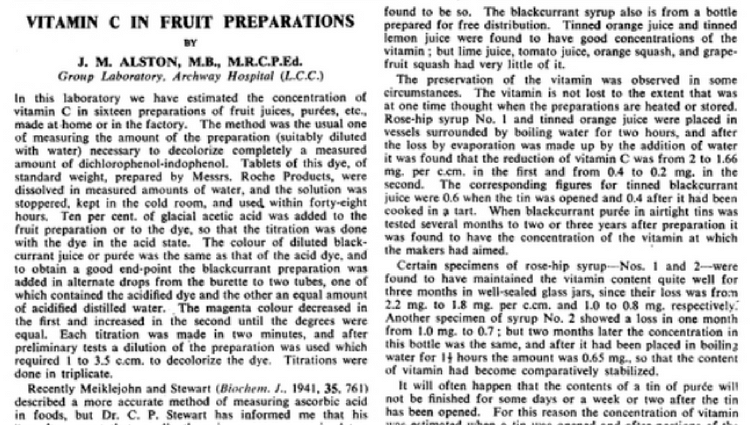 The following is an extract from a report on Vitamin C loss in cooked Rosehip syrup, by the British Medical Journal dated May 2, 1942.

“Recently Meiklejohn and Stewart (Biochem1. J., 1941, 35, 761) described a more accurate method of measuring ascorbic acid in foods, but Dr. C. P. Stewart has informed me that his “…results suggest that usually there is no gross error in determining the ascorbic acid content of foodstuffs by direct indophenol titration.”

The material which contained the highest concentration (2.2mg. per c.cm.) of vitamin C was a rose-hip syrup (No. 1) tested a few days after it was made by Mrs. Leyland, matron of Islington Institution, from the following recipe:

Take 4 lb. rose-hips and 21 lb. sugar. Wash rose-hips and put in an enamelled pan. Cover with water and bring to the boil. Simmer gently for ten minutes or until tender. Mash with a wooden spoon. Put into a jelly-bag and squeeze out as much juice as possible. Return pulp to the pan and add as much water as at first. Bring to the boil and again simmer. Put back into a jelly bag and squeeze again. Mix the two lots of juice and put into a clean jelly-bag. Allow to drip all night.

Boil down the juice until there is about 2 pints left. Add the sugar in the above proportions. Stir until dissolved; boil rapidly for seven minutes. Bottle while hot in sterilised bottles. Seal at once.

Store in a dark cupboard. If possible use a clean jelly-bag for each straining. The fluid should be quite clear. The following list gives the concentrations found when the containers were first opened:

The three specimens of rose-hip juice were made by the same person from the same recipe, and factors in the different results might be variations in the amount of concentration by boiling and the fact that rose-hips differ in the concentration of vitamin C according to the situation of their growth and the degree of ripeness when they are pulled. The hips for the third preparation were pulled in January, when they were far past their best condition.

The two preparations of black currant puree were made by the same firm. No. 2 was from a tin prepared for free distribution at welfare clinics; the concentration of vitamin C was arranged at the request of the Ministry of Food to be approximately equal to that of orange juice, and it was found to be so.

The black currant syrup also is from a bottle prepared for free distribution. Tinned orange juice and tinned lemon juice were found to have good concentrations of the vitamin; but lime juice, tomato juice, orange squash, and grapefruit squash had very little of it. The preservation of the vitamin was observed in some circumstances.

The vitamin is not lost to the extent that was at one time thought when the preparations are heated or stored. Rose-hip syrup No. 1 and tinned orange juiice were placed in vessels surrounded by boiling water for two hours, and after the loss by evaporation was made up by the addition of water it was found that the reduction of vitamin C was from 2 to 1.66 mg. per c.cm. in the first and from 0.4 to 0.2 mg. in the second.

The corresponding figures for tinned black currant juice were 0.6 when the tin was opened and 0.4 after it had’ been cooked in a tart. When black currant puree in airtight tins was tested several months to two or three years after preparation it was found to have the concentration of the vitamin at which the makers had aimed.

Certain specimens of rosehip syrup – Nos. 1 and 2 – were found to have maintained the vitamin content quite well for three months in well-sealed glass jars, since their loss was from 2.2 mg. to 1.8 mg. per c.cm. and 1.0 to 0.8 mg. respectively.

Another specimen of syrup No. 2 showed a loss in one month from 1.0 mg. to 0.7; but two months later the concentration in this bottle was the same, and after it had been placed in boiling water for 1 hours the amount was 0.65 mg., so that the content of vitamin had become comparatively stabilised.

It will often happen that the contents of a tin of puree will not be finished for some days or a week or two after the tin has been opened. For this reason the concentration of vitamin was estimated when a tin was opened and after portions of the contents had been kept for one or two weeks in glass bottles and in different circumstances, as shown in the ‘following table:

From the second column (which is calculated from the observed figures of the first column and from the amount of evaporation that had occurred) it is seen that vitamin was lost when the puree was left in contact with the atmosphere (whether 1% glucose was added or not), and to a smaller extent when it was kept in a jar from which air was exhausted sufficiently to decolorise methylene blue in the usual indicator for anaerobiosis.

The losses were of 15% or less. Under a layer of about I cm. of paraffin oil no loss occurred. In the two portions kept in air, evaporation occurred, and when the same volumes before and after evaporation are considered, the concentration of the puree thus caused almost compensated for the loss of vitamin.

These tests were made in winter-time; in the warmer weather evaporation might concentrate the puree faster than the decrease of vitamin concentration occurred. It would appear, therefore, that the vitamin is likely to remain comparatively stable,in black currant puree and rose-hip syrup if these are kept in tins or bottles which are air-tight and contain the minimum residual air.”

Read more: Everything you need to know about rosehips