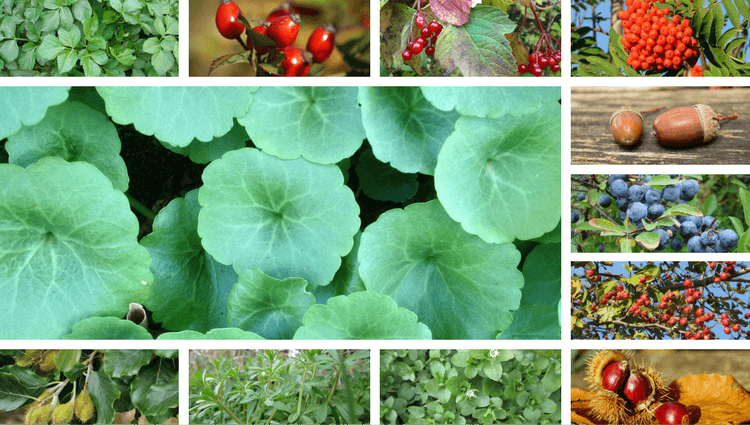 Autumn is the season of fruits, nuts, roots, berries and seeds.

I am acutely aware of the Autumn smells on the wind. The freshness in the air as it strokes my face. The frost on the ground.

As we slip into the dark months, I love going out late afternoon to gather.

There is a deep sense of connection to place during this seasonal shift.

And as a quiet stillness descends, it reminds me for some reason, of my grandmother falling asleep by the fire.

One of my all time favourite wild edible plants, delicious Alexanders are pushing forth new growth at this time. Traditionally grown in monastic gardens, the Victorians would earth them up, to dampen down their myrrh like flavours.

The black seeds are ready to gather now and make a great black-pepper mimic (minus the heat). They make a great addition to the “hidden spice chest of the hedgerow”. Read my Traditional and Modern Use of Alexanders.

Beech nuts are another ancient food. You’ll drive yourself insane gathering and shelling them on your own, so its best done with friends or your family. Beech nuts need to be cooked before eating in any large amount as there have been reports of poisoning when consumed raw.

See my post on Traditional and Modern Use of Beech. Although I have had many folks tell me they get on fine eating them raw. I’m just reporting the science facts. You are of course free to do what you will, just remember to take responsibility for any negative outcome!

Commonly known as Sloe, as in sloe gin! Many folk think this is all you can do with the fruit. Always freeze/defrost the fruit first before using. Although the fruits can taste a little astringent (drying), they go really well in hedgerow jams due to their high pectin content.

Rather than using gin try Sambuca. And if sweet stuff isn’t your thing, if you lacto-ferment them, they will transform into a great black olive mimic.

Burdock is called gobo in Japan and is a national delicacy. This is my favourite root, because they taste gorgeous. The texture is a mix of carrot/celery. Eaten either raw or cooked the versatility of this wild root is only limited by your imagination.

Digging them up can be hard work, and don’t forget that you need to have landowners permission or you might be done for theft! [R] For more about this amazing plant, read my Traditional and Modern Use of Burdock. Here is a photo tutorial on how to dig up burdock roots and prepare them for a stir-fry. Note: It is illegal to dig up roots without landowner’s consent.

Chickweed has a delicious earthy, beetroot flavour that goes great in salads. Although some folk like to cook it, I usually don’t and prefer it mixed in with some nutrient boosting watercress.

Use your fingers to gauge when it becomes tough, and then snip above. Sometimes you’ll find the young chickweed growth looking rather wilted, but gather anyway and refresh in water to return it to vibrancy.

The young tips of Cleavers, roughly 2-3 inches in length are delicious. This plant is usually pretty hairy and requires cooking.

At this time of year you can sprinkle them liberally onto salads. If you find a nice young crop the hairs are barely noticeable.

Or for a quick snack simply ‘plop’ them on top of your rice during the final stage of cooking so they can wilt.

Traditionally the Dog Rose is what country folk gathered and with 20 times the vitamin C content of oranges, rosehips are a must use superfood during the Autumn and Winter months.

They contain tiny hairs that need removing, so that can be a bit of a palaver, but here’s my method for How to Dry and Store Rosehips.

All rosehips are edible, however remember that “edible doesn’t necessarily mean tasty”! From syrup, jelly, jams to fruit leathers, rosehips are hugely versatile in the kitchen.

Traditionally eaten in Siberia, they were made into pies as well as canned, so people had a ready supply of vitamin C during the extreme Winter months. They have a very high nutritive value, as well as being an awesome antioxidant. [R]

The fruits of this plant make one of the most delicious jellies in existence! Known as the “stinky sock tree” due to the smell the fruits give off while cooking, they are well worth playing with. See my scrumalicious guilder rose jelly recipe below.

In the Urals in Russia they are combined with sea buckthorn and cranberries to make an alcoholic drink, as well as being used in cognacs and mead making.

Safety: The fruits of Guelder rose must be cooked, and not eaten raw.

In November it’s the hawthorn berries you need to gather. Make certain that you try different fruits from different trees because many just taste yuck. Hawthorn is a great example of why wild cultured plants are not monoculture, farmed plants.

The range in flavour can vary greatly. My advice is to look for deep, dark red, nicely swollen fruits. Get it right and you’ll feel like you’re eating a tiny mini apple.

Well worth gathering if you can find it in your neck of the woods. Juicy and succulent, each community varies in taste from bitter-sweet to thirst-quenching nectar. Definitely one for the salad bowl, but cooked carefully and it’s equally delicious.

Many folk think acorns are poisonous, but that isn’t true as they have been eaten for thousands of years. The reason for this myth is due to their high tannin content which needs to be removed otherwise the tannins will start to ruin your kidneys. However you most likely wouldn’t be able to enough for that to happen as they are incredibly drying and bitter before the tannins have been removed. The process of removing the tannin from acorns takes a little time.

Other than shelling, which is time consuming and will send you buggy if you do this on your own, it’s best to recruit some friends to help you out and make a party of the process.

Usually folk simply turn them into flour for use in breads, pie crusts, biscuits etc. The acorn recipe below worked really well, and is a little different to the usual “oh you just make flour with ’em” approach.

Bitter sweet rowan fruits need to be frozen then defrosted before use. The freezing mimics frost and allows more juice to be extracted as well as sweetening the fruit. Traditionally fruits such as these where gathered after the first frost. But with climate change all the rage, you might not even get one!

If you don’t know sweet chestnut, then you have a deprived life! They are gorgeous, and apart from roasting them over the fire (or in an oven if you must), or boiling them, they also make a delicious nut-roast.

Try my sweet chestnut recipe below, and those sensual times idling by the wood burner might turn deeply sexy for you due to the addition of vanilla (a natural aphrodisiac) [R].