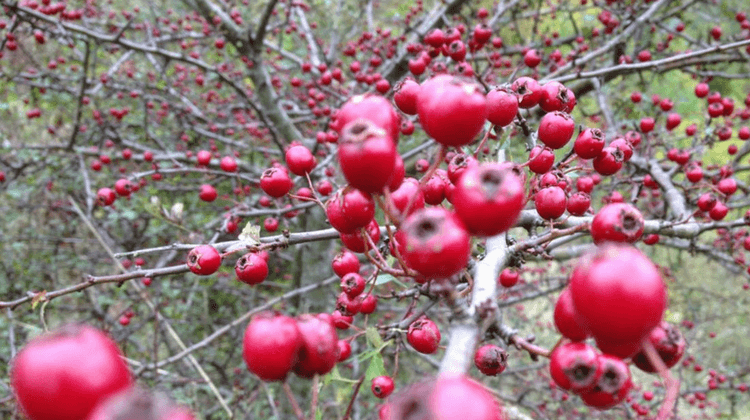 A week or so ago I mentioned that I was pondering what to do with hawthorn berries.

Something a little different to the usual sweet dishes that they are used in usually.

At the weekend while out with the grand-urchins I gathered a small bag of hawthorn berries. I was wanting to experiment.

If you’ve never tried hawthorn berries raw then do so, as they taste a little like small apples.

“Small apples Robin, are you sure?”

I often get this response from folk attending one of my foraging courses, and I totally get it.

Chances are you have nibbled on a hawthorn berry, turned your nose up, and posited the universal question “that’s awful, what the bloody ‘ell is it doing in the wild food books!”.

It’s a common reaction, which I too had in the early days, yet it led me to an understanding that “the wild is not monoculture”.

You see in our industrial food systems we have to grow plants that look and taste the same whether they are in the north, south, east or west of these isles.

Food that is uniform (and on the whole bland), so most of the 65 million souls in this country will want to eat it.

In the wild this doesn’t happen. In the wild a plant can taste very different to the same species you find a few yards away.

It’s terroir at a granular level.

And hawthorn is a brilliant example of this.

In the beginning when I returned to foraging… actually I prefer the word gathering, I was going around my grazing grounds nibbling on everything I could find.

To clarify… I only nibbled on what I was 100% certain was edible. I didn’t simply nibble on EVERYTHING! That would be dumb.

And hawthorn had me foxed for quite awhile.

I was going to give up on said plant, until fortunately I chanced upon a hawthorn tree laden with fruit, that as soon as I nibbled on it I realised why it was in the wild food books… it tasted amazing, and not the usual dry, tasteless bad mouth experience other hawthorns had given me.

One of my aphorisms is “the plant is not the problem, you are”.

So when you have a bad taste experience, don’t give up on the plant.

Chances are you have just gathered it at the wrong time in its life cycle, or maybe it was growing in depleted soil.

There could be a number of reasons, however just keep playing with it until you find the perfect time to gather its gifts.

And this will vary depending on where you live in the country as well as a whole range of other reasons, as I’ve just mentioned.

Currently the hawthorns I collected at the weekend are sitting fermenting (not alcohol) on a shelf in my bathroom. It’s nice and warm in there.

What am I creating?

Ah, well all will be revealed within the week, but suffice to say so far my little creation is coming along rather well.

In the meantime while you’re waiting for me to send over the recipe, why not go out and find the tastiest hawthorn tree around your landbase.

See it is an exercise in “tasting terroir”, becoming more intimate with the place where you find your feet.