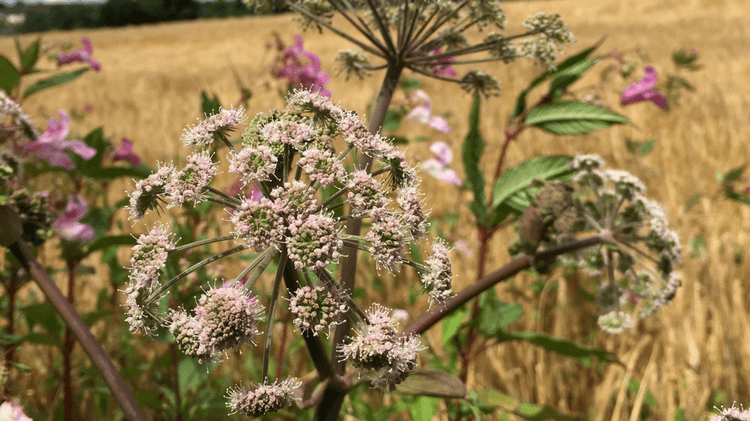 However, the uses of this wild edible are just as varied and interesting.

Umbrella-like clusters of white flowers tinged with pink or purple burst from a hairy stalk and stem with purple furrows. The appearance of the leaves might be confused with the leaves of poisonous hemlock water-dropwort (Oenanthe crocata). The inner stem is spongy and the short, thick root is filled with milky juice. The seeds are reddish and hard.

A perennial plant flowering from July to September.

The traditional use for angelica – both wild and garden angelica – is as candied decoration for cakes and sweets.

Garden angelica is more often used because the leaf stalks and stems are not as tough and bitter as wild angelica.

The shoots, stalks or stems are boiled till soft then peeled and the fleshy pulp is crystallised by soaking in sugar syrup and baking in the oven.1

Boil the young leaves and stems to eat as a vegetable or chop the leaves and add to stewed fruit like rhubarb.2

The sweet-tasting roots are also edible and the aromatic seeds can be used as a culinary spice.1

There is little information on the nutritional properties of wild angelica, however, it may be helpful as a medicinal food.

The plant can be useful for minor stomach upsets and indigestion thanks to its antispasmodic and anti-inflammatory actions.3

Wild angelica is often recorded in herbals as a poorer substitute for garden angelica.

Like garden angelica, it may be used for many complaints from lung and chest diseases to rheumatism and corns – however, garden angelica is often the preferred plant of choice.4

There are specifically documented uses for wild angelica in Irish folk medicine. For example, chewing the roots of the plant before breakfast was said to cure heart palpitations and promote urination.1

Irish records also document wild angelica as a treatment for epilepsy,1 and to treat hydrophobia (a fear of water that was a symptom particularly associated with rabies in humans).5

Like all species of angelica, wild angelica contains phototoxic compounds called furanocoumarins that may cause sensitivity to the sun.

Wild angelica juice may also cause a rash or skin inflammation in some individuals.6