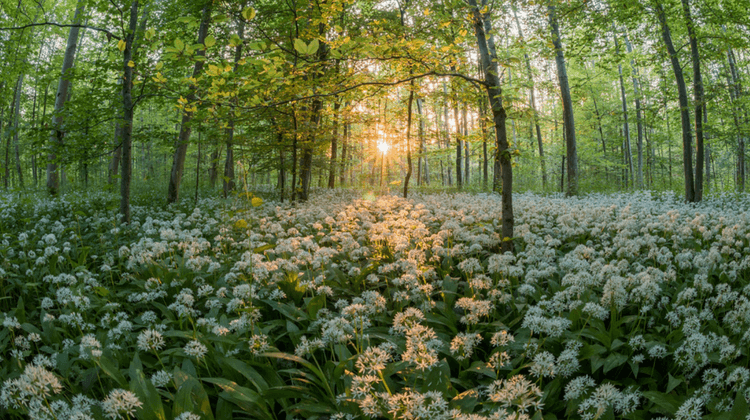 The leaves of wild garlic harvested before flowering have a delicious, sweet and pungent taste. Excellent raw in salads and as pesto. Dry or dehydrate leaves to make crisps.

Cooked leaves are a good vegetable, and they lose their pungency. All parts of the plant make good lactic acid ferments.

Where Does Wild Garlic Grow

Wild garlic is a plant of shady, damp woodlands, fields and hedgerows.

Its tiny white flowers and bright green leaves in some places form a canopy beneath the trees and in other areas, it’s quite scarce.

It is commonplace in ancient woods where it creates a flowering carpet of star-like blossoms instead of the blue flooring of bluebells.

The English naturalist William Turner in 1548 knew the plant as ramsey, bucrammes (buck rammes) and rammes, and several places in England share its names, such as Ramsbottom (meaning ‘Ramson valley’) in Lancashire and Ramsey (meaning ‘Ramson island’) in Essex and Huntingdonshire.

The name ramsons was a metaphor for bitterness in Irish folklore. There was a saying in County Donegal: “As bitter as wild garlic”.

How To Cook Wild Garlic

Wild garlic is a less well-known table vegetable than its domesticated relative, but it can be used the same as any herb or green.

Finely chop or bruise the plant to use raw in salads and sandwiches, or boil and mix with other vegetables to make into soups and side dishes.

“The leaves of Ramsons be stamped and eaten of divers in the Low-countries, with fish for a sauce, even as we do eate greene-sauce made with sorrel. The same leaves may very well be eaten in April and May with butter, of such as are of a strong constitution, and laboring men.”

The plant was an important wild edible in ancient Ireland. Jackson writes:

“Chopped leaves add interest to salads or can be added to flavour other foods, such as stews, sauces, soup or soft cheeses and cottage cheese. The leaves can also be made into a puree with nuts, mustard leaves, olive oil and lemon juice to make a pesto that can be used with pasta or added as flavouring to stews, burgers and other meats.”

Coitir tells us it was often gathered to eat raw or cooked in soup or broth.

The leaves could be wrapped around lamb or fish and grilled for a mild garlic flavour, as suggested by Houston and Milne, or chopped with butter and spread over French bread to make “wild garlic bread”.

As recently as the 19th century in Ireland, wild garlic was used to flavour butter instead of salt.

For a quick bite, the young leaves can be eaten with bread and butter, and the flowers can be sprinkled on salads.

The wild herb was so highly valued in Ireland that, according to the Old Irish Brehon laws, there was a fine for stealing it from private land – the poacher would forfeit “two and a half milch cows”.

One wonders how the penalty of two and a half cows was paid.

François Couplan wrote in his book Le Régal Végétal in 2009 that bear (wild) garlic is one of the most widely consumed wild plants in Europe since human history began.

It has been picked by individuals and families, sold in markets (including France and Switzerland), and commercially marketed in cheeses, sauces and condiments.

In Eastern Europe, its harvested for the food industry. In Romania, the leaves are eaten in spring salads dressed with oil and vinegar, cooked like spinach or made into a sour soup (Ciorba).

In Serbia and Bosnia, the leaves and bulbs are eaten (Srijemoé); in Poland, the leaves are fermented in lactic acid and called Kiszonyczosnekniedzwiedzi.

In Russia, wild garlic and a closely related species A. victorialis are used as an ingredient known as cheremsha.

If you’re thinking about giving wild vegetables a go, why not grow wild garlic in a shady part of the garden or allotment? The plant is not well cultivated and the seeds are largely spread by ants.

Nevertheless, if you can encourage wild garlic to grow on your doorstep, the leaf and bulb are highly nutritious.

The plant has a strong garlic smell that might not appeal to everyone, but its mild flavour is more reminiscent of onions.

He recalls an Italian chef in the Chilterns, England, who “makes a flavoured olive oil by soaking ramson leaves in it”.

Wild garlic makes a fine addition to omelettes, cream cheeses or dips, sauces, and as a side vegetable to fish.

The bulbs, as well as leaves, can be chopped and cooked in casseroles, and the leaf bulbils can be used like capers.

Wild garlic can be used for several more adventurous dishes, for example: ‘ramsons risotto’, ‘bear garlic soup’, and ‘beartsiki’ – a twist on the Greek tzatziki.

If you don’t have time to deliver your own ramsons delight to the table – don’t worry. Wild garlic leaves are simply delicious in peanut butter sandwiches, according to late English ecologist Oliver Rackham.

The juice of ramsons was once used as a household disinfectant.

The garlic-smelling leaves were used in Scotland to repel midges.

100g of wild garlic bulbs have 16mg of vitamin C and over 2mg of protein.

The plant’s common name of ‘bear garlic’ is from the belief that bears ate wild garlic to regain their strength after a long winter’s slumber.

As one author says:

“Plants of the bear contain the power of renewal and purification. Specifically, they break up hardenings, warm the body and make a person ‘as strong as a bear.”

The cloves of wild garlic were planted for good luck in the thatch of Irish cottages; this custom was also thought to deter fairies.

The plant makes an appearance in Irish legends and poems. The Mad Sweeney – a king of Country Antrim – exiled himself from society and survived in the wild by eating plants, including wild garlic.

The poem about the Hill of Howth, in north County Dublin, mentions the herb: “the peak bright-knolled beyond all hills…full of wild garlic and trees”.

In magic and ritual, wild garlic was thought to scare away venomous creatures; as you’ll read later, this might explain why Dioscorides thought it cured snake bites.

A stranger custom told athletes to chew a piece of the plant before a race to ensure victory, and a similar belief was held for men going into battle.

In astrology, wild garlic was ruled by Mars and Neptune. If it was planted at full moon, it was thought to grow like an onion with only one bulb.

In early Christian traditions, wild garlic flowers were used to decorate churches on the feast day of St Alphege (19 April). The church must have overwhelmed its congregation with the smell.

The ancient Greek physician Dioscorides wrote in the 1st century that garlic could cure the bites of snakes, although this remedy was little mentioned in the works of early herbalists in Britain and Ireland.

Early healers among the Celts, Teutonic tribes and ancient Romans were familiar with the wild herb and called it herba salutaris, meaning ‘healing herb’.

The Physicians of Myddfai, a group of herbalists first recorded around the 13th century in Wales, used wild garlic as a healing plant.

A remedy was recorded by the Welsh physicians: “for a swelling of the stomach. Take goats’ whey, and pound the herb called ramsons, mixing together and straining. Let it be your only drink for three days”.

John Gerard, English herbalist in the 16th century, wrote that wild garlic was good as a cure for stones in the body.

His recommendation was carried into the Scottish Highlands and Islands, where an infusion of the leaves was drunk for ‘gravel’ or ‘stone; the remedy was sometimes taken with brandy.

The plant was made into a poultice for infected wounds and an infusion drunk as a blood tonic.

Wild garlic was greatly valued for its healing properties in Irish folk medicine. It was eaten raw or boiled in milk and rubbed onto skin as a remedy.

The vast range of diseases for which wild garlic was indicated in Ireland made it regarded as a panacea. “’Nine diseases shiver before the garlic’ is a County Sligo saying.

The herb was carried in people’s pockets to ward off flu during the 1918 pandemic in Ireland.

In other parts of the British Isles, the leaves of wild garlic were worn under the soles of the feet to prevent people from catching coughs and colds.

On the Isle of Man, the bulbs were pickled in brown sugar and rum to be stored over winter as a cough-and-cold remedy.

Wild garlic was considered a good preventative in Irish folk medicine to ward off coughs, colds and flu – a belief that was shared in other parts of Britain.

A 17th-century proverb said eating leeks in March and ramsons in May would keep the doctor away:

“Eat leeks in Lide March and ramsins in May
And all the year after physitians may play.
CN French, A Countryman’s Day Book (1929)

In Ireland, wild garlic was sometimes employed as a veterinary remedy for various ailments in horses and cattle, such as ringworm in calves.

In County Westmeath, the herb was grown in fields for cows to graze because of its beneficial effects; although some said it tainted the flavour of butter.

As recently as 2001, there is a record of using wild garlic cloves – inserted under the tail – to treat cattle diseases.

Wild garlic has many benefits over its domesticated cousin (A. sativum).

It was recognised as “Plant of the Year” in 1992 by the Association for the Protection and Research of European Medicinal Plants.

Wild garlic has higher quantities of the heart-friendly constituents ajoene and adenosine, which help to lower blood pressure and reduce blood cholesterol.

Wild garlic is not only a heart protector and blood purifier, it also cleanses and improves digestion, which is helpful to various ailments from skin disorders to stomach problems, and it boosts the body’s immune system.

The bruised plant releases a chemical called allicin that acts against microorganisms. This supports its use in herbalism for coughs, colds, flu and sore throats.

Present-day herbals also recommend wild garlic as a stomach tonic, and for conditions that benefit from an improved flow of bile and increased urination; it can be used to relieve cramps and tackle obesity.

As a healing herb, wild garlic can be drunk as a tea, taken as a macerated oil (for example, in olive oil), or eaten raw in salads and sandwiches.

Before rushing out to pick wild garlic in spring, however, do check first with your doctor before using a herbal medicine to treat any condition.

Some people are allergic to plants related to garlic and reported side effects from taking wild garlic range from bad breath and stomach upsets to allergic reactions.

Overindulgence in the herb might also cause flatulence and heartburn.

Duke cautions that it may thin blood and therefore is not suitable for people taking blood-thinning medication.

Here are answers to over 20 frequently asked questions about wild garlic.