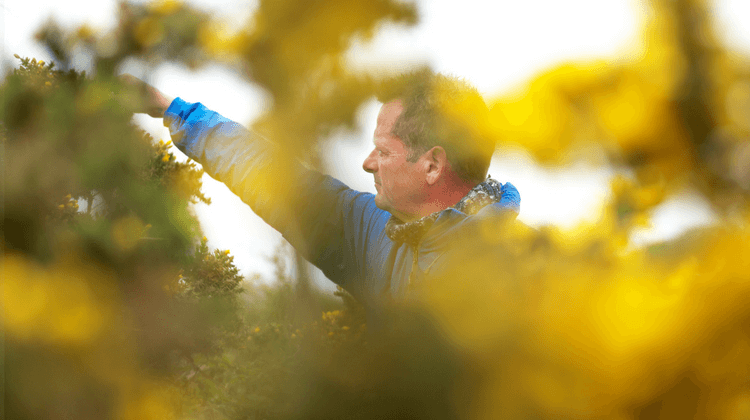 How I got into plants, or how I came back to plants, really, was that I had a digital publishing company up until 2004. I was working seven days a week, 15-hour days.

I didn’t see my daughter grow up. I didn’t see the seasons. And I basically broke down It was hardcore.

It was kickboxing every single day in those early years of the internet. I realised that I had just spent the previous five years in a screen. Basically in a box.

So I had enough money in the bank to leave all that behind. Because it was not good for me.

I had become a drunk and a drug addict. So I had to sort myself out.

I would take the dog down the hedge. I lived in the countryside then. I live in Exeter now. And I just started seeing this green wall and finding these plants.

I pulled them out and then I’d get all these books out of the library and I’d start identifying them. I’d start researching them and looking into their history.

Eighty percent of the plants I was identifying were or had been used as medicinal plants.

I’d always been interested in holistic health as we used to call it back then. And for me food was always kind of the focus. I love my food. I love travelling. I love experiencing cultures through their food systems.

So I started focusing on what was actually edible in the hedgerow and discovered a whole world I didn’t realise I already new. Because I grew up in the countryside, I went to school in the countryside. My great aunts would take me on to Dartmoor in the summer and we’d go foraging. But we didn’t use that word.

Foraging is a word that we use to describe ancient cultures, but it’s a currently modern word. We say “I’m going foraging today”.

We’d go out and get sweet chestnuts. We’d have a crafty cigarette at school and cover the stink of tobacco on our breath with wild garlic.

We’d just eat stuff that we knew. But it wasn’t anything special. There was no big deal about it. There was nothing buzzy about it.

When I came back to plants in 2004, all these memories started coming back in quite extreme ways. I remember when I was a boy at 12 years old I had a book.

That book had taught me how to see if there was a badger set still live or how to creep up on deer (not to kill them), but to just observe them. Wind direction etc.

And I remember this line drawing came to mind. It was really, really vivid. It kind of haunted me for about two weeks.

So one day I was walking down in Sidmouth, Devon (where I lived). And I passed a charity shop that I had never been into.

I stopped and walked in and my brain, my rational brain was thinking clothes, but I ended up in front of the bookshelf.

I reached out and I pulled out the first book. I opened that book, and I kid you not. It was exactly the same book, a different edition and it opened on exactly the same page of stalking deer to observe them. The same image that had been haunting my mind for two weeks prior to that.

So spooky stuff like that was starting to happen as my path to well being progressed. And it progressed in alignment with the deeper I was meeting plants.

Initially I was meeting plants from a very rational perspective. I was a rational atheist at that time. And then slowly, things started happening. I started having sensory experiences with plants.

My happiness and my well being went up. My depression would go down and I felt very, very contented.

It got to a point where I just wanted to be absorbed by the earth, by plants. That sounds really hippie, but it was just there.

I was in absolute ecstasy and awe that something as simple as walking down a country lane. Picking and crushing and smelling a plant could have such a profound effect on my well being and happiness.

I never ever intended to be a teacher of plants. I still don’t regard myself as a teacher. I’m just a guide. I know a little bit about plants.

In fact the more I know, the less I know. And one day I met a guy named Frank Cook who many people in the plant communities in America and now over here have heard of.

I filmed him for three hours and at the end he just said, “You need to be teaching plants.”

I went, “No Frank, that’s not the game plan. Robin’s game plan is… I’m doing this as a total break from work that had burned me out, and nearly killed me.”

He said, “No, I think you need to be teaching plants. Just start small. It doesn’t have to be big. Just start teaching people locally.”

So I did and the response was great. People seem to love the way that I tell the stories of plants. Which predominantly comes from my own experience, my own relationship with the individual plants, and also from my research.

As an ethnobotanical researcher I study people, plants and human culture. Plants as food, plants as medicine and plants as utilitarian uses.

Plants are the foundation of human existence. That is why we are here. We could not be here without plants.

Then slowly over time what happened was that even though when I came back to plants I was a rational atheist. Prior to that I’d actually been very interested in spiritual practises.

We studied all the old middle age mystics. The Rhineland mystics, people like Meister Eckhart and Hildegard of Bingen. All these kinds of people always had a place in my heart.

I’m not a Christian and I’m not a pagan. I don’t do shamanism or magic. It’s not my world.

There’s a wheel with many spokes on it. My spoke is the contemplative tradition. Which is an emptying out.

It’s an emptying out and waiting to see what one is filled with.

When I go to meet a plant, even one that I don’t know its name, which is actually even better. Because then it’s a bit more zen mind, beginner’s mind. There’s no preconceptions, there’s no projections going on.

I will sit and I will do some practises and just empty myself out and see what comes to mind.

I’m very interested in plant/human relationships and how the messages, the information, the knowing arises within us.

Frank would always talk about these “other ways of knowing about the world”.

To me the natural world talks to us through our imagination.

Look at the Velcro. Mr. Velcro got inspired by Burdock. It’s these simple ways. That if we get out of our own way as humans, and allow the greater and non-human world to fill us, that solutions to the problems of the world come forth.

In the same way the ancient Taoists before Confucius would sit, would contemplate. They would do certain practises to get themselves into a centred, still and empty place.

Then through observation. Awareness practises. They would observe patterns and forms within the natural world that they could then incorporate back into the human world. They created a civilisation as a result that eclipsed anything the people of these Isles were doing.

We were running around in bearskins when the Chinese had a culture that was extraordinary.

The simple act of meeting plant in an empty sense. Of emptying myself out, means I’m filled. Deeply filled and deeply nourished.

Food goes well beyond just putting it in your mouth.

My Latest Print Book is Now Available on Amazon