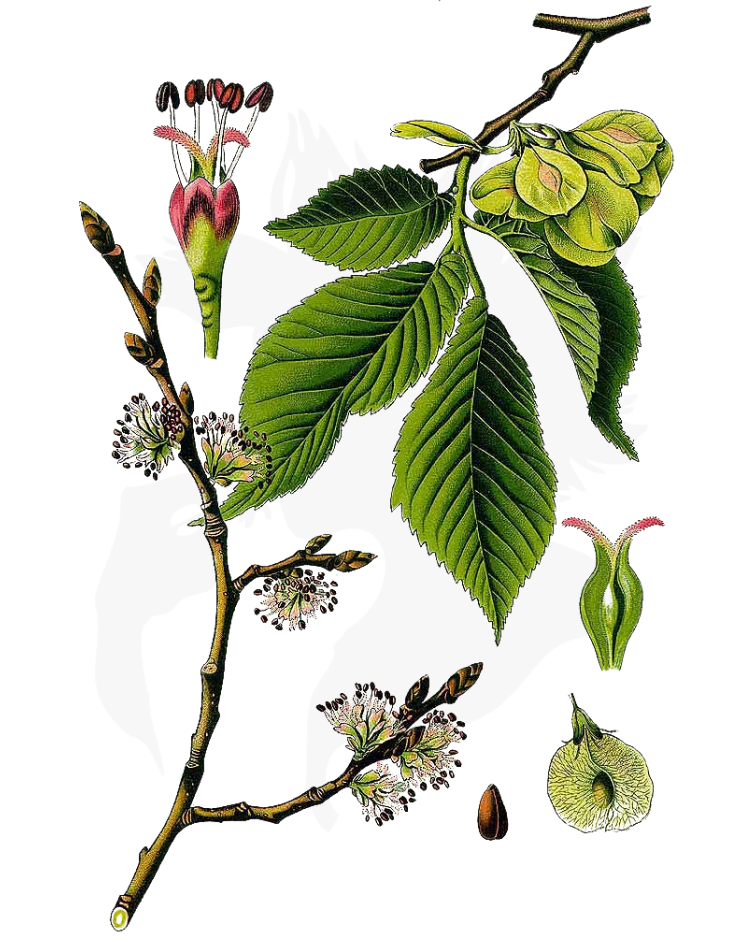 With around forty-five species of elm found from forests in the northern hemisphere to the tropical mountains of Asia, we’re spoilt for choice. Here, I focus on the Wych Elm.

In Gerard’s time elm trees were common in all parts of Britain. Many species of elm since, particularly European and American species, have declined due to Dutch elm disease.

As a creation tree in Germanic mythology, the king of the gods, Odin or Woden, created the first woman, Embla, from the elm, and the first man, Ask, from the ash.

The tree was associated with fertility as well as creation. A guardian tree was grown on farms in Sweden and pregnant women would hug the tree to ensure an easy delivery.

In Ireland, a man could be cured of impotency by striking him with an elm wand carved with his name in Ogham letters.

In the Ogham alphabet, Wych Elm is the third vowel and signifies the letter Ur, meaning ‘moist’.

Witches seemed to have good cause to be wary of trees in times past and the elm was no exception to this rule. In Europe, the elm was used to scare away evil and supernatural beings.

It was even said that you could beat the devil himself with an elm stick. An account from 1908 says that the Slovakian night watch carried halberds – a pole weapon – with a handle of elm to drive off evil spirits.

The Wych Elm provided wood for conjurers to make their wands and twigs for the superstitious to sew into their clothing or fix to horses’ bridles as a protection charm.

Most importantly, the elm could protect the dairy, which was always at risk as far as witches were concerned. A twig of Wych Elm in the pocket was enough for a dairy farmer to ensure his cows would produce good butter.

Alternatively, a sprig of elm was put in the butter churn to make sure the milk would turn. In Scotland, this was done to ensure the fairies would not steal the butter. In Sicily, elm branches were once fastened to fig trees to protect the fig crops.

The small flowers appear reddish or purplish-brown. The seeds are centred on a papery flat disc.

The Wych Elm is indigenous to Britain and many other elm species (probably not indigenous) are found in Britain, as well as in Europe, Asia and North Africa.

A tree of woodlands and hedgerows, elms are also found in parks.

A deciduous tree flowering in spring.

Elm bark has been ground to make meal for bread in countries like Ireland and Norway, although this was considered an emergency food in times of famine.

The mucilaginous inner bark can be added as a thickener for soups. Children in Europe once knew the elm as ‘chewbark’ because they enjoyed chewing the clammy inner bark.

The young, slightly bitter, leaves are an edible salad green, and the developing, aromatic-flavoured, fruits, can be eaten raw or added to salads.

Leaves and flowers can be cooked as a vegetable or added to soups and stews.

Elm leaves have also been brewed to make tea or as an adulterant to tea.

There is little information on the nutrient value of elm however, leaves and inner bark are known to be astringent and may be drunk as a healthy tonic.

Elm has been praised since ancient times as a wound healer. This may be due to the astringent properties of the leaves and bark.

The inner bark was also taken internally for diarrhoea, rheumatism, or as a mouthwash for ulcers.

Elm wood is hard and durable, and particularly resistant to water. This has made it useful for ship-building, canal-lock gates, drainage and water pipes, and so on.

The ‘twisting grain’ makes elm wood a good choice for making chairs, because it is unlikely to crack and splinter.

Information on contraindications, side effects and toxicity of elm as a medicinal or food plant is lacking.