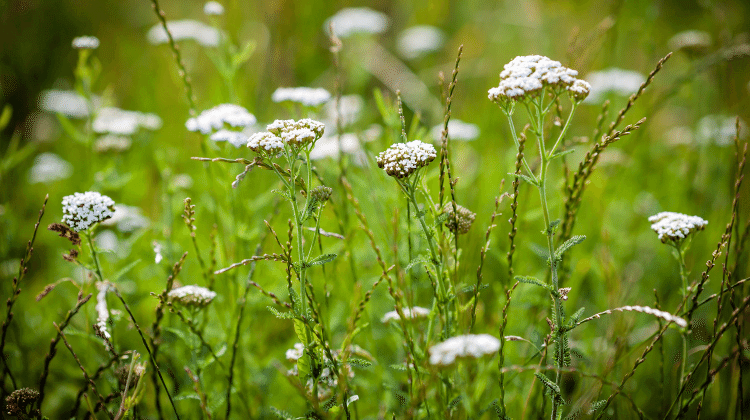 Yarrow is the herb of a million flowers thanks to its prolific foliage.

This wild edible has been used since ancient times in food and medicine, and it is still a commonly used herb today.

It has a rough, angular stem with long, dark-green, feathery leaves. The flowers are white or pale lilac that resembles an umbellifer.

Found in grasslands, meadows, pastures, and along roadsides.

Its peppery foliage and bitter leaves and flowers bring an aromatic flavour to salads.1

The leaves can be used in almost any dish as a vegetable, added to soups and sauces, or simply boiled and simmered in butter as a side dish.2,3

The flowering tops can be sprinkled on salads and other dishes as a condiment or decoration.4

Pick, wash and dry some handfuls of young leaves. Bring a pot of salted water to the boil, add the leaves and simmer for 20 minutes. Then drain the leaves and chop them up, melt a knob of butter in a small saucepan, add the chopped leaves along with salt and pepper, Stir for 5 minutes, then serve.

Known as Herba militaris by the ancient Romans who used the wild herb to stop bleeding from cuts and wounds.

Yarrow was also called soldiers’ woundwort and staunch grass due to its ability to staunch bleeding.5,6

In herbal medicine, it was valued as an astringent herb for scratches, cuts, wounds and sores.7

Other Uses of Yarrow

Dried leaves were once used as a substitute for tobacco.3 As well as diving sticks when consulting the I-Ching.

Yarrow may cause skin irritation in some people. It is best avoided during pregnancy and when breastfeeding.

Identifying yarrow can be very hard for beginners. The following links offer superb photo identification of yarrow at different stages of its growth cycle.

These photos are taken by experienced botanists, so can be relied on.