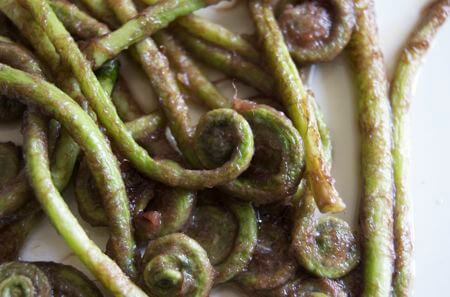 Eating Hart’s-tongue fern (Asplenium scolopendrium) is a bit of an unknown. There is nothing written about it in any of the currently published wild food books.

However Marcus Harrison – the UK’s leading academic researcher into wild edible plants – mentioned to me that it had been eaten in Britain in the past, but as a pottage herb. Which part of the plant was used is unknown.

Some ferns contain carcinogens, I can find no record of this being the case with Hart’s Tongue Fern. Ferns also contain an enzyme called thiaminase which causes Vitamin B1 deficiency, however cooking destroys the enzyme.

This is a wild edible that can be used two ways:

I include this recipe because I don’t have a problem tasting and researching very esoteric plants, esoteric in the sense that they are ‘hidden’ or ‘unknown’ by most people.

You consume this plant very much at your own risk. You have been warned! Ferns are carcinogenic, unless processed properly. Only experienced foragers should attempt this recipe.